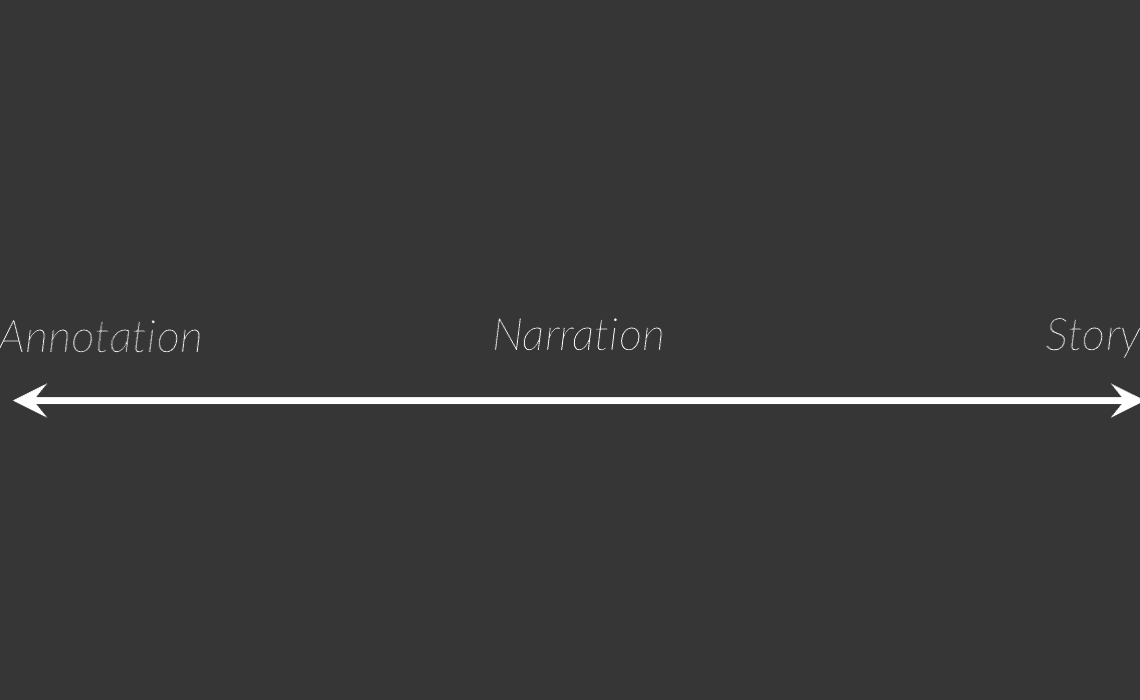 In my last couple of posts, I discussed my definition of story and story structure. As people engaged with data and trying to visualize those data, we often say, “Let’s tell a story with these data,” and in the end, we create a bar chart, line chart, area chart, or some other representation of the data. But for most of us, most of the time we are not in fact telling stories with our data; we are instead making a point or illustrating a fact or argument. If, however, we are telling stories with data, then these models of story structure should apply to data and data visualization. But they don’t. Let’s take Freytag’s Pyramid, perhaps one of the more well-known representations of story structure. In Freytag’s Pyramid, we start with the Exposition or Background. In data visualization, this might be the framing of the graph—the axes, the gridlines, the basic layout.

We then move to the Rising Action; in data visualization, we might call this the Supporting Facts, the visualization of the data. The objects on the graph are illustrating facts or some trends; they are leading us toward some insight.

We now get to the Climax. This could be considered the Main Insights from the chart. This line goes up, this one goes down, and here are where they cross. (As an aside, too often, unfortunately, we leave it to the reader to guess what the Main Insights are, but we can do better by adding active titles and annotation. Help the reader find the Main Insights by telling them—guide them along so that they can more easily see your point and then make their own decisions. But I digress.)

Things sort of fall apart on the other side of the Pyramid. What is Falling Action as it applies to data? The reader’s falling attention? The Resolution phase at the end might be considered Next Steps or a Call to Action, but do most of the graphs we create have such phases? Many of these graphs are providing facts or expanding knowledge, but not leading us to a set of Next Steps. (It’s also worth reading Brent Dykes’ take on this). I think most of us are using the word story as it applies to anything we are trying to communicate with data; we are using that word too flippantly and too carelessly. One could argue that we in the data visualization field can come up with our own definition of story, but that’s simply changing the definition to meet our needs. Plus, I don’t think that’s how many people view it—they see visualizing data as a way to tell a story, but it rarely is a story, as the simple example above hopefully demonstrates.

Let’s try an alternative schematic, one in which we don’t just call everything a story. In this schematic–derived from what Alberto Cairo talked about in Episode 35 of the Data Stories podcast and then later wrote about on his blog–we can draw a spectrum that runs from Annotation to Narration and then to Story.

Annotation consists of marking or highlighting certain data points in a visualization. Such annotation can consist of explaining how a graph works and the content of the graph. For example, this bubble plot from the LA Times uses color (the big red box in the top-right quadrant and the big blue box in the lower-left quadrant) and text (“Worse”, “Better”) to explain how to read the graph, and then more annotation (e.g., “Reduced violent and property crime rate”) to deliver the content. Narration consists of guiding the reader through your visualizations as a sequence (this can be accomplished across multiple charts or panels). Alberto makes the case that narration requires that the sequence display cause and effect relationships. I’m not sure I totally agree on this point; I think, perhaps, my definition is a little broader because I’m simply looking at guiding the reader through a series of visualizations, regardless of whether the point is cause and effect, correlations, or even simply descriptive.

But neither of these are Story. Even if you care and are therefore emotional about the topic, the visualizations themselves are left for you to read and explore at a singular moment. Thus, they can’t lead you to a meaningful climax because the result is left for you to immediately read and absorb.

The “mechanism” of Narration (and to a lesser extent, certain Annotations) can, however, turn to story if it has the two defining characteristics of story: emotion and a meaningful climax. You thus need narration to achieve story because you can’t get to the meaningful climax without guiding the reader from one point/argument to the next. This is not to argue that we can’t or don’t tell stories with data—we certainly do. As I mentioned in the first post of this series, Snow Fall and Failure Factories are just two examples of pieces that tell stories. As another example, Bloomberg’s What’s Really Warming the World? has a story element to it because it builds to a meaningful climax—that greenhouse gases are indeed warming the planet. By contrast, however, the New York Times’ Rating a Health Law’s Success is a narrative piece—each graph is accompanied by a bit of text that explains it; but it doesn’t build to a meaningful climax. Similarly, last February, I wrote 11 Charts about the Social Security Disability Insurance Program in which 11 charts were accompanied by text; they didn’t lead to a climax, but instead the text narrated each graph. Again, there’s nothing wrong with this approach—and it is certainly useful and can be engaging—but it’s not a story.

Why does this matter? If we and our colleagues and readers intuitively know what a story is—even if we are defining it incorrectly—does a formal definition even matter? I think that if we were more careful with the word story, we would use it more strategically and purposefully. And in that case, we would think about what story really is and work carefully to tell stories. When we then say, “Let’s tell a story with these data,” we might actually try to do so–by talking to people or groups, by interweaving animation or some other element, and by adding elements to really get people to care. Of course, we might also just acknowledge that we are presenting a fact or point or argument.

In the next post, I’ll make a case about what that means and how some groups/fields are doing a better job than others.