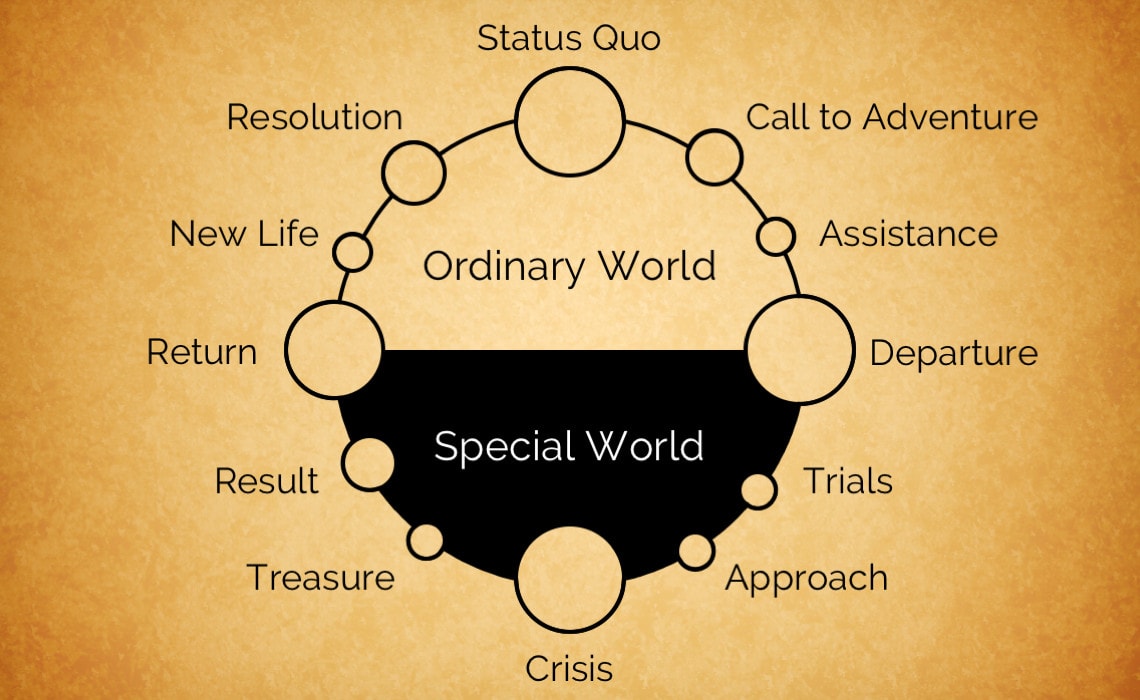 This is just one of the famous 22 Rules of Storytelling from Pixar, shared by Pixar Story Artist Emma Coats (and apparently originally set out by Kenn Adams). As the terms “story” and “data” get mixed together more and more, it’s worth taking a look at traditional story structure to see if we are appropriately applying the word story to data. The simple Pixar structure noted above can help you write and build a story, from its initial exposition to climax to final resolution. But this is only one of several story structures we can consider, and to dive into other structures and then apply them to data will, I think, demonstrate that our common use of the term is not quite accurate. (Additionally, from a data visualization perspectives, it’s fun to visualize these structures.)

In Booker’s tome (it’s almost 900 pages in what seems like 6 point font), he lays out a theory that all stories fall into 7 plot types and that all 7 follow similar structures. Overcoming the Monster. The central character (let’s call him or her the protagonist) sets out to defeat an antagonistic force, often evil. Examples: The Guns of Navarone, Star Wars, Harry Potter.

Rebirth. The protagonist experiences an important event and is forced to change his or her ways, often for the better. Examples: Despicable Me, The Secret Garden.

Rags to Riches. The poor protagonist acquires power, wealth, love, etc. before losing it all and then gaining it back as he or she grows as a person. Examples: Aladdin, Cinderella.

Voyage and Return. The protagonist goes to a strange/different land, overcomes some obstacles, and returns with some experience, typically having grown for the better. Examples: Wizard of Oz, Finding Nemo.

Comedy. Humorous character with a happy and cheerful ending (but noting that comedy is more than just humor). Examples: A Midsummer Night’s Dream, Four Weddings and a Funeral.

Tragedy. The protagonist is a hero with a major character flaw and, ultimately, his or her undoing. Examples: Macbeth, Bonnie and Clyde.

The Quest. The protagonist (usually with some companions) set out to acquire an object or get to a specific location, facing obstacles and temptations. Examples: Lord of the Rings, Harold and Kumar Go To White Castle.

In each plot type, there is a loose definition of story. For example, take the Rebirth plot in the movie Despicable Me (if you can’t tell by the examples above, I watch a lot of movies with my kids). The main character Gru starts out as a supervillain doing supervillain stuff. As the story begins, we see that his goal is to steal the moon. To do so, he steals a shrink ray, which is then stolen from him by another supervillain, Vector (in one of his great lines: “I’m committing crimes with both direction and magnitude!”). To get the shrink ray back, Gru enlists the unwitting help of 3 orphan girls. He finds himself caring more and more for the kids, ultimately sacrificing the stolen moon to save the girls and thus changes his ways for the better. Oh, plus, there are minions. (If you want to see more of these structures drawn out, see this post from Gavin McMahon.)

A master storyteller, Vonnegut also showed how stories can be plotted out on a simple pair of axes: Ill Fortune to Good Fortune, Beginning to End. In the story of “Man in a Hole” (which requires neither a man nor a hole) the protagonist starts off fine, then finds some trouble, and gets out of it in the end.

In Vonnegut’s diagram of the “Boy Gets Girl” story, the boy finds something wonderful, then something bad happens (e.g., the girl and boy fight), but then he gets it back again. You can watch Vonnegut present these structures himself in this great presentation, and you can read about other structures here.

Campbell’s structure is based on hundreds (thousands?) of years of folklore and fairytales. In Campbell’s structure, the hero/heroine begins the story in an “Ordinary World”—he/she is living the Status Quo. There is then some Call to Adventure where the hero must decide whether to follow a new path. The hero usually finds some assistance—sometimes in the form of an elderly figure (e.g., fairy godmother in Cinderella), a magical being (e.g., Genie in Aladdin), or some other form of help (e.g., the fellowship in the Lord of the Rings).

The hero then Returns to the Ordinary Life to live a New Life and the story is Resolved in a (new) Status Quo. Lord of the Rings satisfies the Hero’s Journey nicely: Frodo is living the life in the Shire (Status Quo). Bilbo gives him the Ring and its existence is discovered by Sauron (Call to Adventure). He Departs his Ordinary World with help from the other Hobbits, Gandalf, and the rest of the Fellowship. In the Special World (outside the Shire), he faces numerous Trials and Crises. He ultimately destroys the Ring of Power (with assistance from Gollum) and begins his Return to the Shire where he starts a New Life (for a short time, at least) and the story is Resolved.

McKee’s book is really about screenwriting, and he doesn’t completely lay out a story structure, per se, but different types of stories. In McKee’s model, there are three plot types: Archplot (pronounced “ark-plot” as in archetype), Miniplot, and Antiplot.

Archplot is classic story design. This is a “story built around an active protagonist who struggles against primarily external forces of antagonism to pursue his or her desire…to a close ending of absolute, irreversible change.” In McKee’s view, the vast majority of films fall in this category, including A Fish Called Wanda and Thelma and Louise.

Miniplot reduces this classic story to its parts. Miniplot “strives for simplicity and economy.” Here, we have a smaller set of films including, for example, A River Runs Through It. Freytag’s Pyramid may be one of the more famous story structure diagrams. In it, he shows 5 stages of story.

1. The Pyramid begins at the bottom-left with Exposition—this is the background information, setting the stage for the entire story. Frodo lives in the Shire; Luke Skywalker on Tatooine.

2. Then, we have Rising Action: a series of events that build toward the greatest interest. Frodo inherits the ring and begins his journey; Luke’s aunt and uncle are killed.

3. We then have the Climax of the story—the turning point, which changes the protaganist’s fate. Frodo destroys the ring; Luke destroys the Death Star.

4. Then we have Falling Action—the conflict unravels—Sauron is destroyed and Frodo (and Sam) are rescued; Luke returns a hero with Princess Leia and Han Solo.

5. Finally, we have the Resolution of the story. Conflicts are resolved, tension is released, the tragedy ends. The Hobbits return to the Shire; Luke and the Rebels celebrate as Darth Vader flies off into space. So, we have several models of story structure. Tomorrow, I’ll demonstrate how our typical data visualizations of line charts, bar charts, and pie charts fail to adhere to Freytag’s Pyramid and therefore the word “story” regularly fails to work with data.

If you’re interested in learning more about story, I have posted a collection of books you should check out here.