Vizathon with Bread for the World Institute 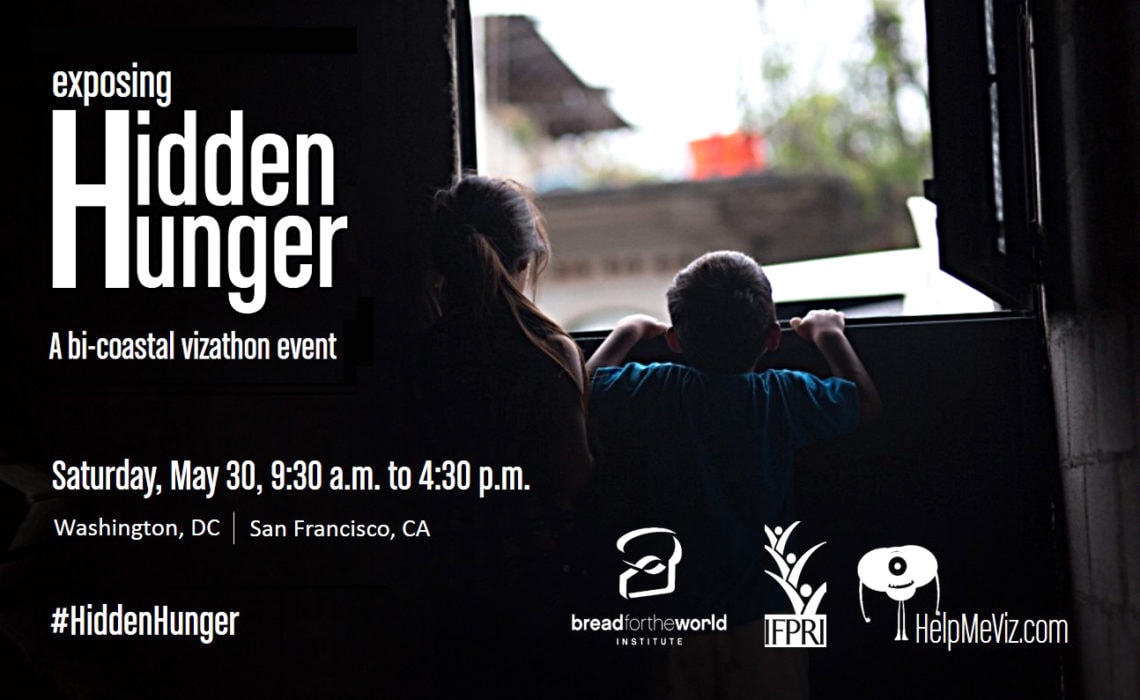 This was originally published on HelpMeViz on May 7, 2015.

I’m excited to announce the return of our second annual HelpMeViz Data Vizathon event. On Saturday, May 30th, HelpMeViz will bring back our community of coders, data scientists, and data visualizers to help Bread for the World Institute and the International Food Policy Research Institute (IFPRI) with two important data visualization challenges that can shed light on the illusive problem of hidden hunger in the developing world. We’re especially excited to be expanding this year’s vizathon to two sites—one on the East Coast in Washington, DC and the other on the West Coast in San Francisco.

The Institute and IFPRI have developed two data visualization challenges for which they need our help. Below are summaries of the two challenges, which both deal with a form of ‘hidden hunger.’

“The ‘hidden hunger’ due to micronutrient deficiency does not produce hunger as we know it. You might not feel it in the belly, but it strikes at the core of your health and vitality.”  –Kul C. Gautam, former deputy executive director of UNICEF

It’s tempting to see hunger as just a food quantity issue with clear consequences. But more often than not, hunger is hidden. Hidden hunger describes a reality faced by one in two preschool aged children worldwide, and happens when a child does not receive the right micronutrients to grow to full potential. It impairs cognitive development and causes ill-health and early death to its victims, condemning at least one-fourth of the world to lives lived below their physical and mental potential. Even a child that is getting enough calories can suffer from hidden hunger, and the damage is lifelong and irreversible. As the world celebrates the continued decline of the most visible forms of hunger and malnutrition, hidden hunger persists, and its consequences are holding back children, families, and even economies.

The goal: Find a way to bring hidden hunger out of the shadows. Use the latest global data on micronutrient deficiencies to expose the story of hidden hunger and its massive human costs.

Challenge 2: How Hunger is feeding an Obesity Pandemic

Though it may seem paradoxical, obesity is a deadly form of hunger. Not only are undernourished children more likely to be obese later in life, but obesity signals an unbalanced diet that impairs physical and cognitive development and plagues children and adults with costly, debilitating diseases and heart conditions.

As more countries have moved from low- to middle-income status, hunger has moved too. Urban and rural areas from sub-Saharan Africa and South Asia’s poorest countries to the higher income ones are experiencing rapid increases in overweight and obesity status. This shift is already unleashing an avalanche of new health problems that these countries are not prepared to withstand. Diabetes, cancer, and cardiovascular problems like heart disease and hypertension are all steadily rising in developing countries. Yet unlike the developed economies, these countries do not have adequate health systems to mitigate the causes or to treat the lethal health consequences. It’s beyond time for the global community to recognize obesity as a form of malnutrition, and commit to helping developing countries build the much-needed infrastructure to prevent and respond to it.

The goal: Use recently published obesity and body mass index data to tell the story of obesity’s stunning rise across the developing world, and the avalanche of health conditions it is unleashing.

HelpMeViz, IFPRI, and Bread for the World Institute are inviting up to 50 guests to each site on Saturday, May 30, from 9:30 a.m. – 4:30 p.m. to work on these two challenges. The Institute will provide the data for the two challenges and space for attendees to work; they will also provide breakfast, lunch, and afternoon snacks. Participants will receive a printed copy of the 2016 Hunger Report, to be released in November 2015.

The event will be blogged live on HelpMeViz. We hope that interested people all over the world will want to lend their voice and their skills to these challenges. Data will be made available when the event begins, and visualizations, conversations, and comments from both coasts and anywhere else will be posted to the site in real time.

If you would like to attend in Washington, DC or San Francisco, click the links below to register.