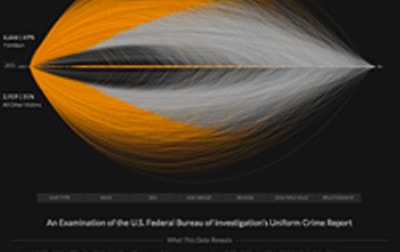 How do we get people to connect with the large, and sometimes abstract, numbers we are trying to communicate? I’ll be talking about this very topic at next week’s Tapestry conference in Annapolis, MD, but it came up a few times at Visualized. Neil Halloran, for example, gave a preview of his new project, The Fallen of World War II, in which he showed the number of civilian and military deaths by country in WWII. The visualization itself was a series of unit column charts with icons of people representing 1,000 deaths each; changes were animated as Neil verbally narrated.

He closed by discussing how he thought the audience can best grasp these numbers by connecting with individuals and their stories. I was a little disappointed here because even though he used two or three photos in his presentation and there were a few moments where the numbers themselves were astounding, I didn’t feel particularly connected with the data; he was, after all, essentially showing us animated column charts. In the end, I think this would be fantastic if embedded within a documentary about WWII, but without doing more to close the loop between individual’s experiences and the numbers shown, I’m not sure people will really connect with the numbers.

Projects that help people connect and comprehend large numbers like these are inherently difficult. Some “emotive visualizations” connect with the reader by striking an emotional cord and downplaying the importance of the precise numbers. For example, Pitch Interactive’s “Out of Sight, Out of Mind” drone strikes visualization and Periscopics’ “U.S. Gun Deaths” were both celebrated in 2013 as evoking emotion through data and design. But I felt more connected to the drones visualization during Wes Grubbs’ presentation when he paired it with images and videos following actual drone strikes. In her talk, Maral Pourkazemi argued that even with its beauty—or perhaps because of its beauty—the drones visualization made her want to act on the information, to somehow help those affected. Perhaps this is enough? Perhaps making us feel is enough and whether we can really comprehend such large concepts and numbers is less important? I’ll explore these themes more in another post later this week and in my talk at Tapestry next week.