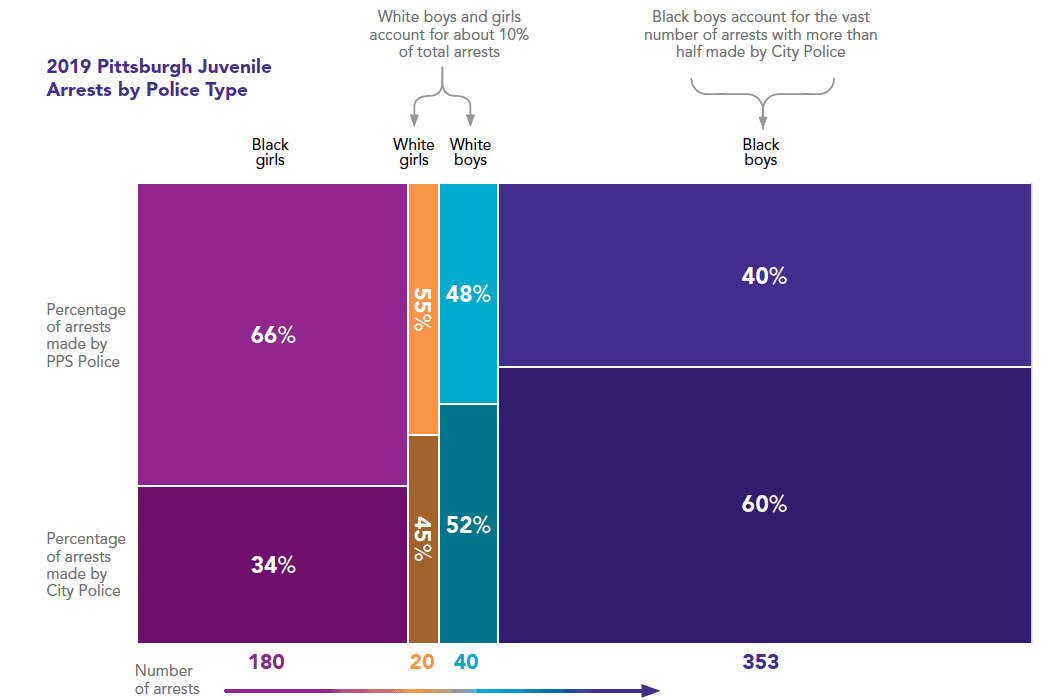 For the past few years, I’ve been working with teams of Interdisciplinary Research Leaders as they develop their research projects. Most teams are made up of three people and consist of researchers and community partners, including community organizers and advocates. It’s been a lot of fun working with these groups, not only because they are keenly interested in improving how they communicate their work, but also because their work is exceptionally interesting, timely, and important.

A few months ago, one of the teams reached out to me to see if I could help with a specific graph in one of their upcoming reports. The research team consisted of researchers from the University of Pittsburgh, the American Civil Liberties Union of Pennsylvania, and Gwen’s Girls, Inc. (a Pittsburgh-based organization that strives to help empower girls and young women). In their project, the team examined juvenile justice in Pittsburgh and Allegheny County and the over-referral of Black youth to juvenile justice.

In one of their main graphs, the team looked at the breakdown of arrests across race (Black and white), gender (boys and girls), and police department (City Police and Pittsburgh Public Schools Police). The text that surrounded the image told a striking story:

As with the high rates of PPS referrals previously discussed, this is
particularly striking when you consider that young people are only in
school for about half of the 365 days in a calendar year. For boys, the
percentages of arrests made by PPS police are also high – 40% of arrests
of Black boys in Pittsburgh in 2019, and 48% of White boys, were made
by PPS police.

The original graph they asked me to review was a set of differently-sized pie charts.

As you may know, I don’t completely hate pie charts and I do think they have their place. But not here. These pie charts are hard to read and asking the reader to compare not just the two slices but also the size of the circles made comprehension difficult.

Instead, I thought a mosaic chart might work for this task. A mosaic chart is like a stacked bar chart where the lengths of the bars represent one variable and the widths represent another variable. They are similar to treemaps or Marimekko charts (some people consider mosaic charts and Marimekko charts the same thing, but I differentiate them because in a mosaic chart, both dimensions sum to a total). I’m a big fan of this chart type and is one that seems to be quite popular this year.

My first shot at this was created in Excel (I wrote a tutorial about how to do so a few years ago) just to demonstrate the concept and how it would look. With the research team’s approval, I went back in and made a slightly nicer version. Here, because there are only eight boxes, I made this in PowerPoint, which enabled me to add some simple annotation and more easily arrange the labels.

With this model in hand, the researchers turned to their graphic design team to add their own colors, font, annotations, and overall style.

You can see how just a little bit of design takes this a long way—good colors and clear labels make this easy to read and support the argument being made in the report.

If you would like to learn more about this important topic, I recommend reading the full report, as well as reading the media various coverage it received in multiple outputs (list below).