Over the past couple of years, I’ve spoken to more than 100 people on my PolicyViz Podcast. Recently, both on the air and off, I’ve found that many of my guests are tired of the old data visualization “rules” that so-called “experts” espouse, among them, no pie charts, no dual axis charts, no red-green color palettes, always start the vertical axis at zero, and no 3D (okay, no one has actually said 3D is a good idea).

The big one, of course, is no pie charts. And while I’m not a “never pie chart ever” acolyte, I don’t make pie charts and gently recommend that others don’t as well. But lately, I’ve been thinking, fuck it, let’s go ahead and make some pie charts.

I don’t know if it was Stephen Few’s 2007 newsletter, “Save the Pies for Dessert” that was the big push for no pie charts ever(!), but disdain for pie charts infiltrates the entire field of data visualization (just check out the Archives of wtfviz.net). Robert Kosara, who I regularly look to for the history of the field, has a nice post about pie charts and doesn’t seem to know the origin of the pie chart hatred either. More recently, Lisa Charlotte Rost wrote a nice post laying out strategies for properly creating pie charts; she neither attacked nor defended pie charts, but simply laid out best practices.

I usually run a little test in my data visualization workshops by asking people to guess the value of the slices in this pie chart. What’s your guess for the yellow slice at the top-left? Most get close to the right answer (10%), but there’s a lot of uncertainty in their responses—they hedge and hesitate, “about 10%?” “maybe, uh, 10%? 11%?”. If the chart doesn’t enable you to accurately discern the values, it’s probably not doing its job. 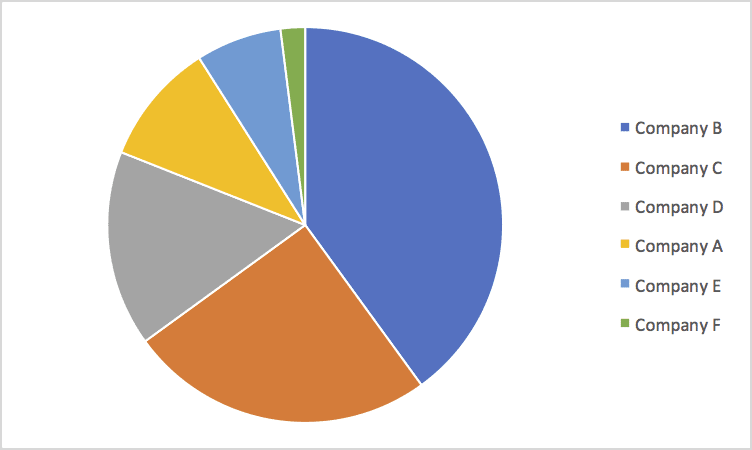 I also show this now-famous image and ask participants to look at one pie chart and try to rank the slices from largest to smallest. I then show the column charts and for most everyone, it’s much easier to rank the values and see the relative differences than in the pie charts. 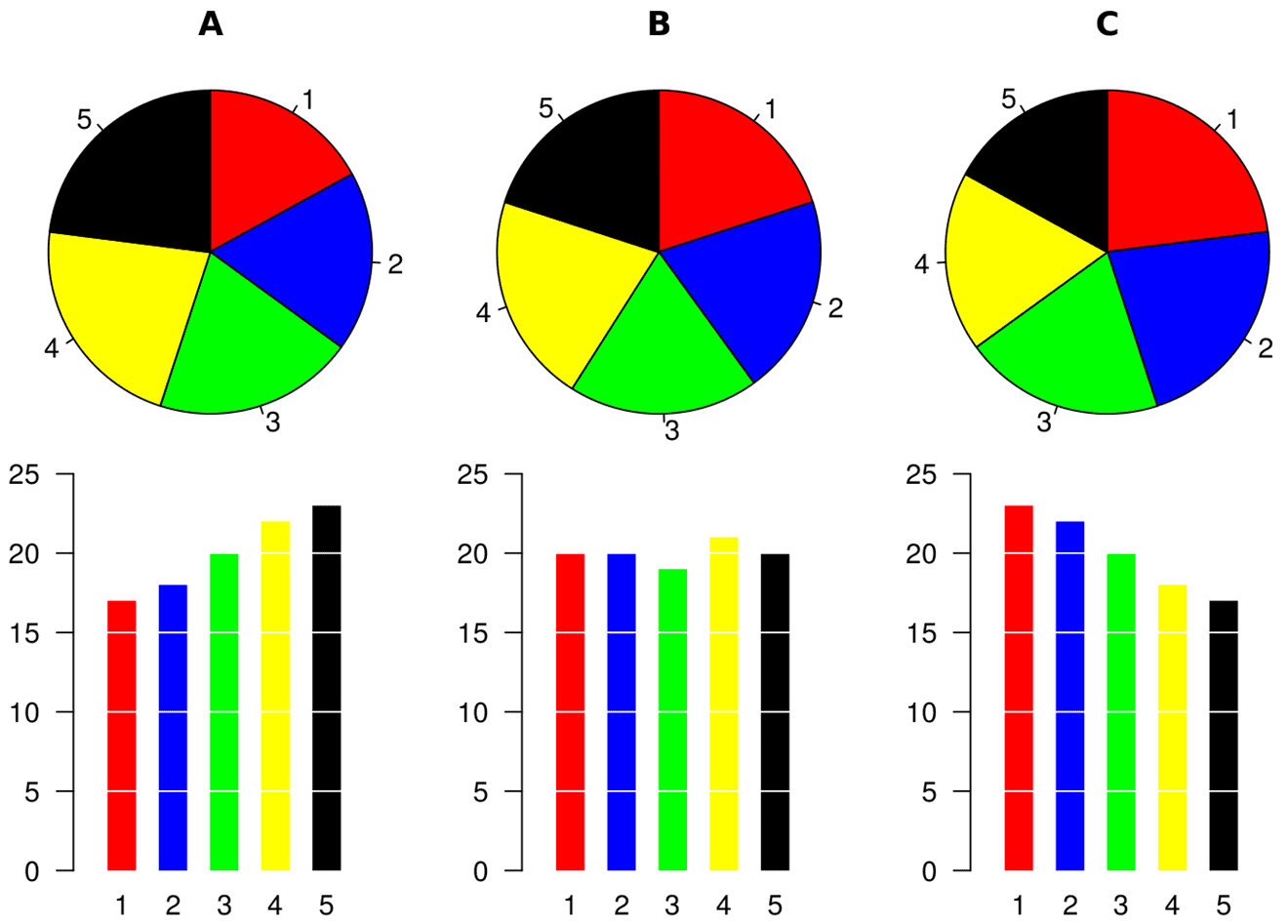 It’s also worth noting that it’s not really clear how we perceive the quantities in the pie chart. Is it the angle at the center? The area of each slice? The arc length? There’s not a ton of research on this pretty basic question, but it’s something that Kosara and Drew Skau examined in two papers released last year (and spoke about on the Podcast last year).

Me and Pie Charts

When I’m asked about my take on my pie charts, my usual answer is:

Recently, however, two things have led me down a path to maybe—MAYBE!—change my mind about pie charts.

First, I’ve been paying more attention to how data visualization is used in social media, especially Twitter. For example, I think the simple pie chart in this Kaiser Family Foundation tweet works. Yes, I’d make some changes here—like putting the labels closer to the chart and making the whole thing a little bigger—but the chart is big and bold, and stands out in my Twitter feed.

#Medicaid and #CHIP are major sources of health coverage for children, covering about 4 in 10 children in the U.S. https://t.co/WB3aHC7GrZ pic.twitter.com/vwfyg8JCli

And yes, this could be a column or bar chart. But KFF publishes a lot of data and visualizations in their Twitter feed, so the pie chart stands out. It also has the big blue slice that’s 53%, slightly larger than half, which is easy for us to identify as it exceeds the vertical diameter of the chart.

The second thing that has made me start to rethink pie charts is my role as a board member of a local nonprofit. One of my roles for this group is to help improve the biannual presentation to the membership. I was asked to help redesign the slides for the December meeting in which part of the presentation was about upcoming building renovations. In that part of the meeting, committee members were planning to show how much money had already been raised and in what increments (e.g., how many donations of less than $25,000, number between $25k and $50k, etc.).

The data (I’ve changed some of the numbers here) showed the number of donors in each of eight classes, the main story being that the few, big dollar donations accounted for nearly half of the entire total. My first inclination was to make a column chart (or two) of the donation shares. I then played around with a scatterplot showing both variables, a slope chart of the two variables, and even a Marimekko of donor amounts and number of donations for each class. 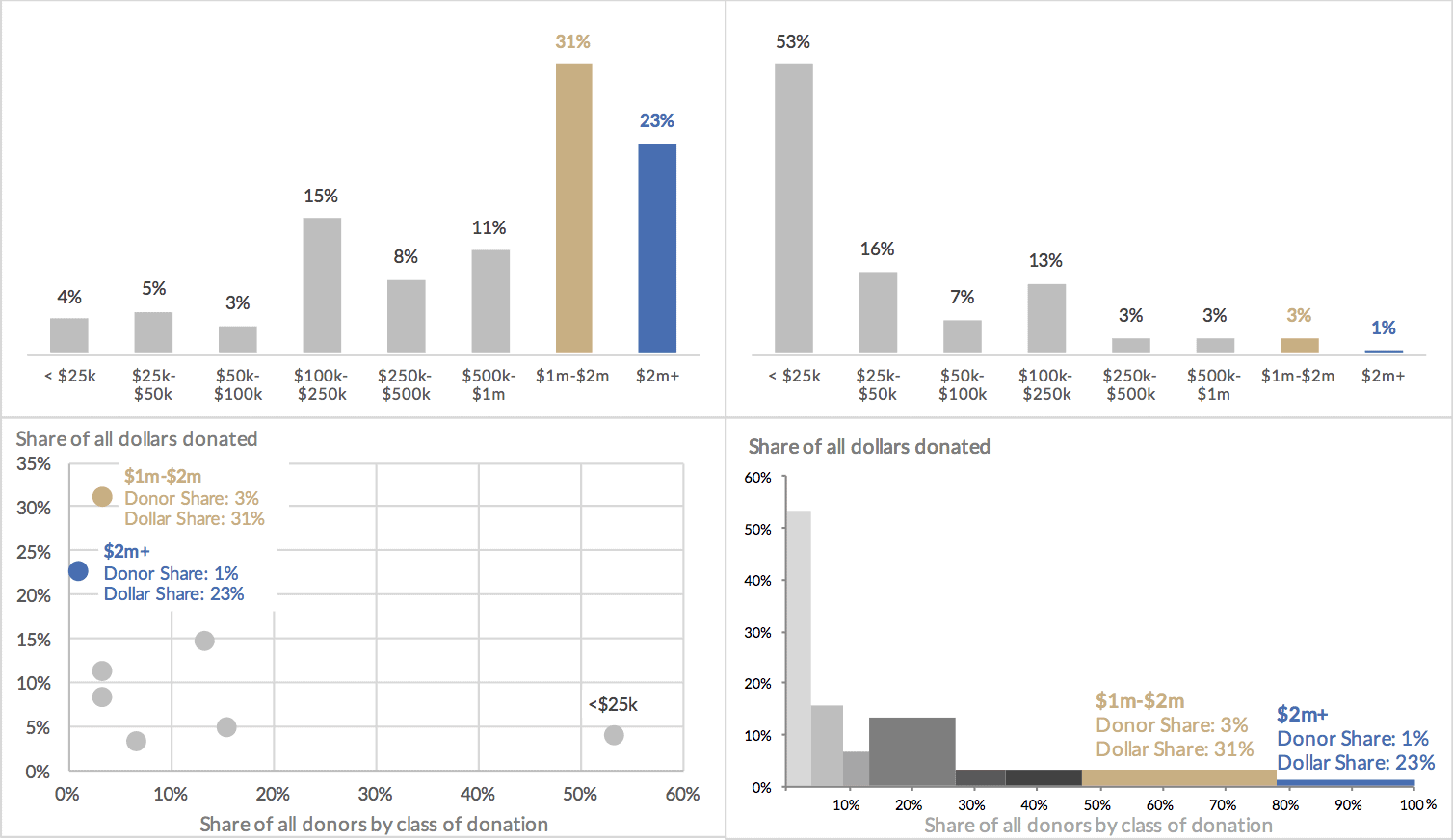 But for this particular audience—a general audience of about 125 people—a pie chart, or even two pie charts, works. This audience can read and understand a pie chart in an instant, and it makes clear that big donor groups account for the bulk of the fundraising to date (again, it’s helpful that the two series exceed that vertical diameter). Imagine explaining how a Marimekko chart or a scatterplot works to an audience who just wants the information as quickly as possible.

Maybe these other chart types would work on this blog or on Twitter to other data viz folks, but to an audience interested in how fundraising is going, the pie chart works. I don’t think I should avoid using pie charts simply because someone is going to throw some snark my way on Twitter.

Yes, 3D pie charts still suck. And showing a pie chart with 40 slices is still bad practice. But so is showing a stacked column chart with 50 groups, and a line chart with 100 lines! Personally, I think I’m over mocking the generic pie chart. 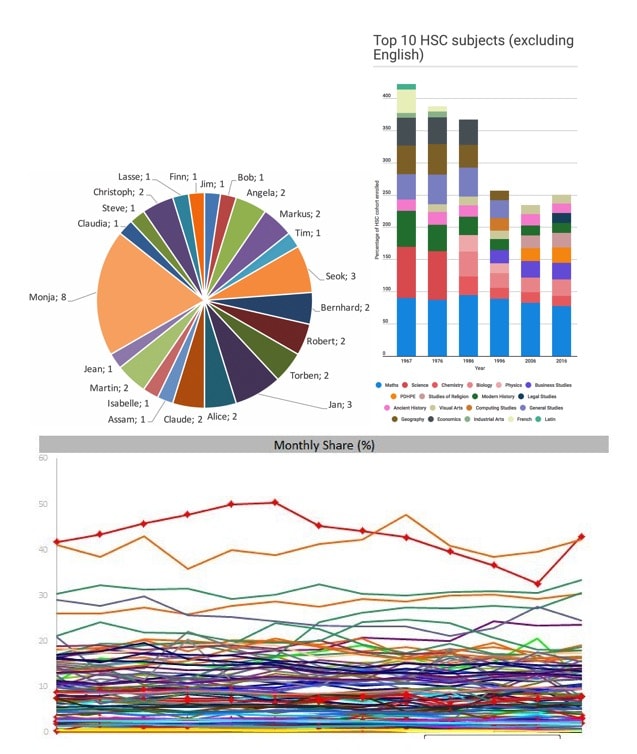 So, fuck it, let’s use pie charts.