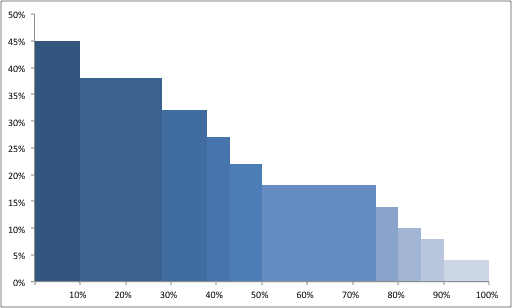 Marimekko charts encode two variables: one along the height of the vertical axis and another using the width of the bars or columns. This one from The Economist, for example, has GDP per capita ($) on the vertical axis and share of global population (%) along the horizontal axis. There are alternatives, of course; they could have used a scatterplot or maybe two column charts. But the Marimekko, I think, does a nice job extending the standard column chart in another dimension.

In Excel, the Marimekko is not a default chart type, so it takes a little doing to create. Jon Peltier has a nice tutorial combining a stacked area chart and line chart, but it requires a bunch of data manipulation, which I found hard to automate (it’s perhaps why he includes it in his Peltier Tech Chart Utility). You may find my method just as complicated, but I use a series of formulas to arrange the data so that it can be easily replicated. There are lots of ways to plot these data: small multiples, scatterplot, pie chart (aghast!), treemap, or a unit chart. For this Marimekko, I’ll put % Purchased along the vertical axis and % of Total on the horizontal axis, and use a different color for each of the 10 Items.

Quick, important caveat here: This method only works when your shares (% of Total) are whole numbers. Peltier’s method allows those shares to be real numbers, so if you have such data, best to use that approach. The philosophy is pretty simple: I’m going to build a column chart with 100 columns, repeating values as necessary. The easy way to do this will give you a single color across all 10 groups (100 columns). The harder—and more satisfying—way will use multiple formulas, but you’ll be able to give each series a different color. In either case, you could simply copy and paste your data multiple times to match the observed frequency, but that can take a long time and is not easily replicable with different data. For either version, we’re going to need to set up the data in a specific way to use the formulas later on, so I’ll walk you through the set-up first, and then the construction of the chart. Some of this might seem repetitive, but bear with me. You can download the Excel file here.

Let me explain each piece of the formula:

So what happened here? All we’re doing is repeating the % Purchased variable some number of times equal to its share of the total. Thus, this formula will give you 10 values of 45%, and in the 11th row, you’ll start with values of 38%, which will continue for 18 positions, and then on and on until you’ve filled up 100 values. You can now create a column chart from Column Q. Once you’ve done so, right-click on the chart and change the Gap Width to 0% and the Series Overlap to 100%. You’ll now have the basic, single-color Marimekko. (We’ll talk about getting the x-axis labels set up correctly at the end.) The challenge with this first graph is that to edit the color of the 10 series separately requires you to change the color of each of the 100 columns. But we can create additional data series to automate that task.

11-20. [Columns R-AA]. I’m going to create 10 different data series (one for each Item) so that I can add them all to one chart and then color each by simply grabbing the entire grup. The numbers at the top of the series (in Row 2) are important here and correspond to each Item Number. This formula is a little complicated, but once I build it in the first column, I can just drag it horizontally and vertically.

Let’s break it down again: Dragging this across and down should give you blocks of numbers that repeat the % Purchased values corresponding to their shares of the total. If you plot this as a column chart, you’ll have 10 separate series that you can color and style individually. Again, you need to format the columns and set the Gap Width to 0% and the Overlap to 100%. The final piece is to set up the x-axis labels. I had to sort of hammer this together a little bit, so bear with me; one last formula.

Now, right-click on your chart and choose Select Data and add Column AB as the Category (X) Axis Labels. Now go back to the chart and format the x-axis: Well, there you have it folks: A Marimekko that just repeats a bunch of columns. If you’ve used this arrangement and formula, the chart should easily update with new data, you can easily style and color the different series, and you will have nice labels along the horizontal axis.

There are probably ways to streamline this approach. Using a combination of INDEX and MATCH, for example, might avoid having to set up the data at the beginning of this tutorial, and there may be an easier way to format the x-axis. If you have comments, suggestions, or other ideas, please add them to the comments section below.