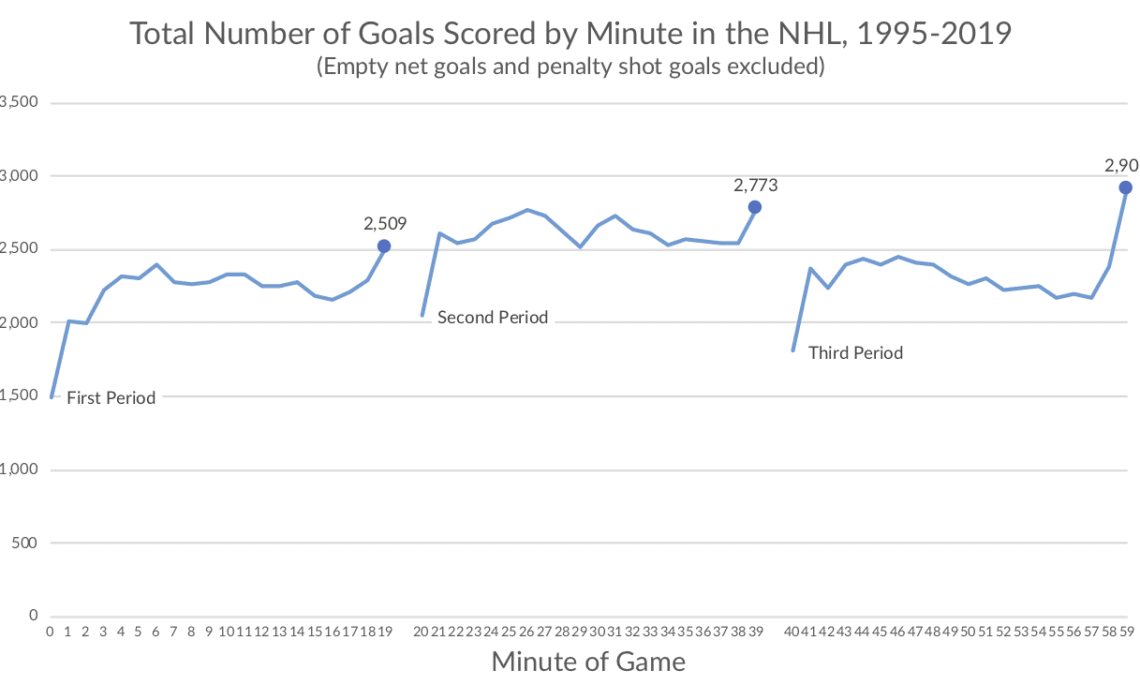 About two years ago, my son received an Xbox One for the holidays. A few months later, alongside the Washington Capitals Stanley Cup run, he and I played a bunch of NHL on the new system. A weird pattern started to emerge as we played—he would regularly score on me in the closing minutes of different periods. I don’t know if I just stopped paying attention or if he figured something out in the game.

I wasn’t keeping careful track of the pattern, but it was noticeable enough that I started to wonder whether professional NHL teams have a propensity to score at the end of each period. I couldn’t find minute-by-minute goal data, so a friend helped me scrape NHL box scores from Hockey Reference.com. (I only found out later that there is an R package called nhlscrapr that will do this more easily.) From here, I was able to gather game data, like game date, final score, home team, and away team. I also captured data on every goal scored: scorer name, name of player(s) who assisted on the goal, exact time of goal, and whether the goal was on a power play, penalty shot, short-handed, or an empty net goal.

With these data in hand, I could finally try to answer my question: Do NHL teams score a lot in the last minute? Turns out, yes, they do. Generally.

Before I show you the results, a few caveats and sample selection decisions:

This pattern is not visible in every year—there are some smaller sample sizes, of course—but it is incrementally enough to make the aggregate numbers pretty stark. There were 414 last-minute goals scored last season (with the sample restrictions noted above), which accounts for 6% of all goals scored. If goals were uniformly (i.e., evenly) distributed across all minutes, that share would be 5%.

I’m not sure exactly what’s going on here. Goals scored in the final minute of play (in the third period) are likely due to the extra offensive skater—remember, those goals are not specially tagged in the data, so it’s not possible to know without a more detailed look. It could also be that teams let up in the final minutes or the effect of rushing to beat the horn has some impact on scoring probabilities. Whatever it is, watch out for Chicago, Winnipeg, and Boston, the three teams that led the league in last-minute goals last year.

There is a ton of information in this data and if you’re into hockey, it’s a lot of fun to play with. If you want to take a pass, you can download this Excel file with my data.