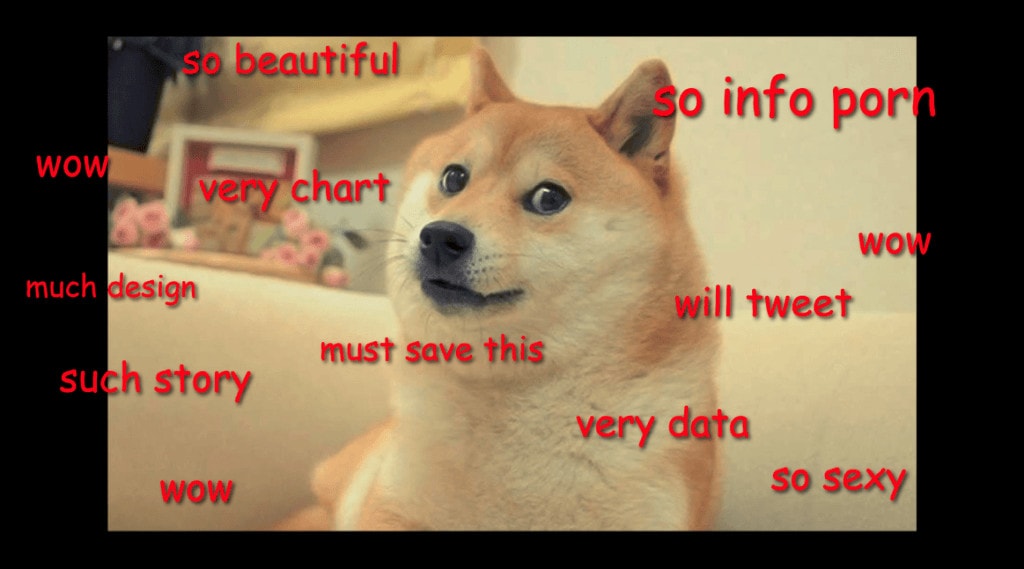 The Visualized conference started out as a rah-rah for data storytelling. But in a surprise visit, Kim Rees (who was in NYC for less than 48 hours, if I’m not mistaken) threw some cold water on the cheerleading, arguing that the phrase seems to be finding its way into every single thing. I am sympathetic to Kim’s point; the term “data storytelling” is starting to feel a bit worn already even though it’s unclear what it really means and how it is best accomplished.

How do we get people to connect, understand, and act upon information being conveyed through data visualization instead of just worrying about being the first one to Tweet its existence? And how do we do a better job of communicating numbers that are too large or too abstract or too unfamiliar? How does Neil Halloran’s visualization help us comprehend the millions of deaths in WWII? How does Giorgia Lupi’s exploratory graphic on artists’ lives help us better understand their experiences? Maybe it’s about readers gaining more familiarity and experience with different and new types of data visualizations that will ultimately blend the terms “data visualization” and “data storytelling” into just one thing.

Maral Pourkazemi and Rachel Binx took this data storytelling critique in two different, interesting ways. Maral defined the “data perv” as someone who only looks at the visualization for a moment without really digesting the information that is important. Personally, I worry that data visualizations are being used to meet some sort of page view target than to inform or educate. I also worry that people think it’s more important to be the first to Tweet the link than to convey the message that visualization is trying to convey. An aside: Maral was reflective in her talk and spoke about her fading optimism that people can use visualizations to enact real change. I was fortunate enough to discuss this further with her because I feel slightly more optimistic: I think as visualizations get better and more popular and deal with more important issues that they can and will help change the world. It may not be that Maral is more pessimistic than I, but she’s probably more realistic. Hoping that a visualization is going to change the mind of a policymaker or someone in power may be wishful thinking. But hoping that as more people view, understand, and share a visualization may act in some small way on its message may lead to better outcomes.

Rachel took a firmer stance. It used to be the case, she argued, that you would have to convince a client that they need to visualize their data and then you would have to convince them that the visualization you produced would work. Now it’s the case that the client comes to the visualizer with the data in hand and even perhaps an idea of what the design should be. On the one hand, this means that data visualization has become a core component to communicate information. On the other hand, Rachel’s concern is that the field has moved quickly from aesthetically-pleasing bar charts to complex interactive visualizations. Personally, I wonder whether the field is transitioning, moving from producing tools to create visualizations to producing techniques that merge data and narratives. Perhaps the field will now move from creating the best, coolest interactive or animated visualizations, to creating visualizations that best connects with people, draws them in, and encourages them to act on the information they now have at hand.