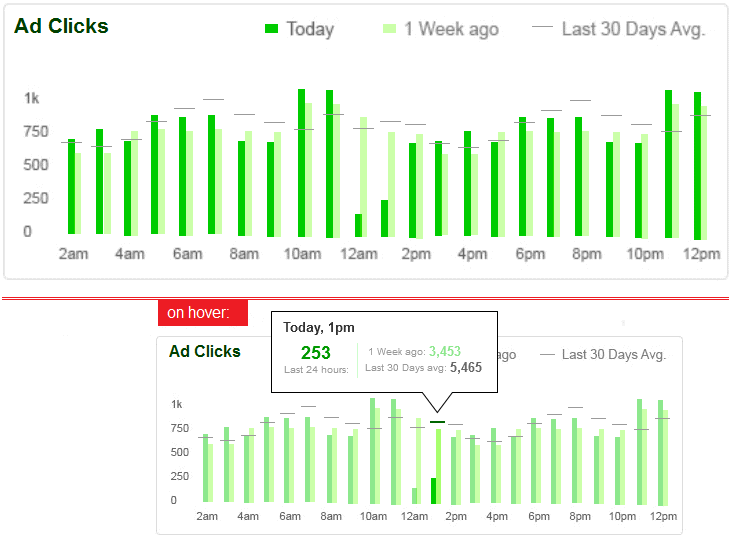 I want to show several performance metrics in an hourly breakdown, let’s take Facebook Ad Clicks (for a specific advertiser/campaign) as an example (data). Each value in the X-axis represents one hour.

Since the timeframe is only 24h, and the breakdown is hourly, we can’t really call it “trend”, therefore I’m not comfortable with using line chart. A line chart is supposed to show trend, and the lines that connect the data points are supposed to have a meaning (increase means increase, decrease means decrease, and if I see an increase/decrease in my data it means I did something good/wrong).

But here, if one hour has less clicks than the previous one, it’s not meaningful (trend-wise) as a day-over-day trend, because we know that there are peak hours, not all the hours are expected to perform the same, etc. It doesn’t mean anything.

So the meaningful comparison is not between the hours, but between same hours in different days. That’s why I added a comparison of each hour to:
– same hour at the same day, 1 week ago
– last 30d average of this hour

I have a dilemma between 2 charts: lines and columns. The line chart, as I said, feels irrelevant because the trend is not the interesting thing here. However, the column chart that looks right to me data-viz-wise, with 1 column for today, 1 lighter column for last week, and an horizontal line (“score bar”) for the monthly average, looks overwhelming (24*2 columns are a lot!! I’m not the only one who thinks it’s really crowded, right?).

You can see here in the photos examples for both of the chart types (also with smaller photos that show what happens on hover, not that important but I just added them for fun).

I would really appreciate any opinion or of course – new suggestions.
Thanks!