Remaking a Confusing Graph from the IMF 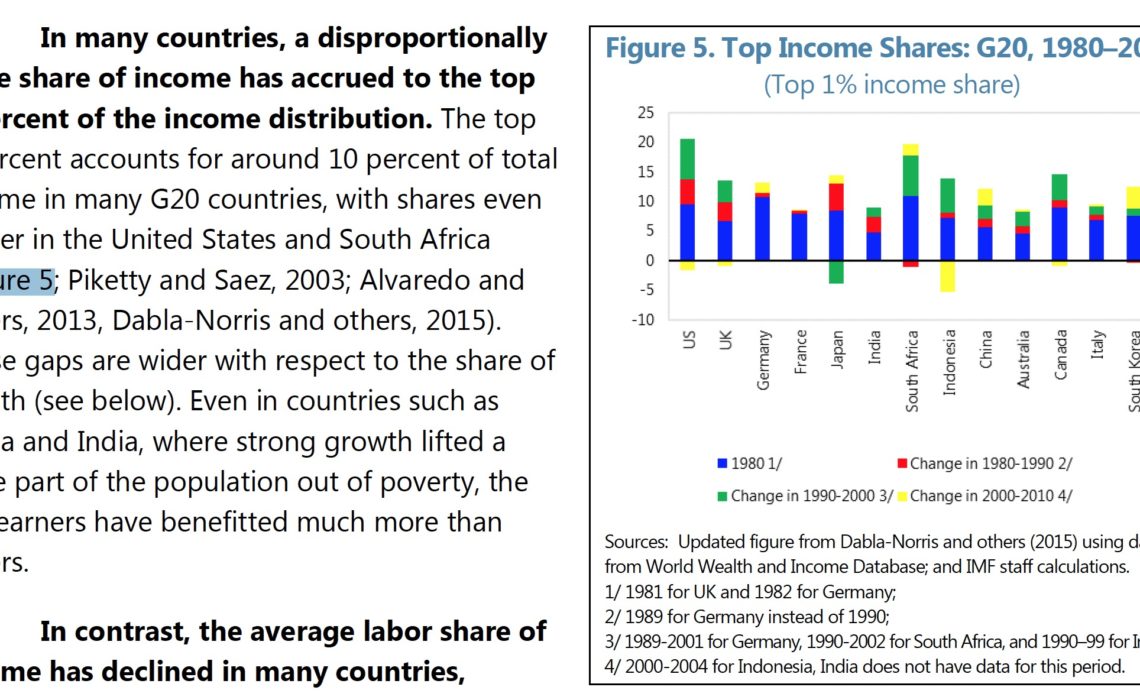 The text does little to explain the chart and it doesn’t even mention the changes over time, which is what I think is being plotted here. Instead, the text argues that the top 1% accounts for “around 10 percent of total income”. If that applies to the 1980 value, it looks to me like only 4 or 5 countries are around 10% (I added the line at 10% in the image below). If it applies to 2010—which would be the sum of the four series—it again doesn’t look like many are around 10%. The negative values make this even more difficult because the entire stacked bar for the 7 countries with negative amounts would shift the whole column down. And let’s not talk about the difficulty of reading the yellow segment.

I have three remake ideas here, each of which uses data I manually recorded by visually inspecting the chart, so don’t look for total accuracy here. I’ve also done a pretty lousy job adding labels and titles, but you get the idea.

I know I come back to this chart type often, but it’s because it’s a simple, compact chart. In this case, I need to assume I have the metrics correct and that the sum of the four series gives me the 2010 level. If so, then I can construct the graph that enables the reader to compare the levels in 1980 and 2010. Again, if I’m understanding the metrics, these data are a perfect candidate for a Waterfall Chart. This chart type visualizes the simple mathematical equation starting with an initial value and then adding/subtracting the changes in the three decades, ending up at the final value in 2017 (forgive me, but I’m being very lazy with my labels and legends here.) The downside is that this graph takes up a lot more room on the page and may take the reader a bit more time to understand what’s going on. Of the two options above, I guess I like the Dot Plot because it’s concise and easy to read. If I had the values in every year, I could do a simple line chart, some kind of Cycle Plot, or some other small multiples line chart. In this specific case, however, my favorite option is to not include a graph at all. Aside from being just confusing, the chart doesn’t add much to the report. I don’t get a better sense of the data or trends by having it included here, so perhaps the best approach is to omit it altogether.

The “no chart” option is one that I think more people should consider. Instead of inserting a graph because “there’s too much text” or because it would just “look good”–two statements I have heard in the past–it may make sense to keep the text concise and move on. As important as visuals are, I don’t think it’s the case that every paper, every paragraph, every statement needs one, so use them carefully and purposefully.

Thoughts? Any other chart type you might make with this? Let me know what you think. Here’s the data.