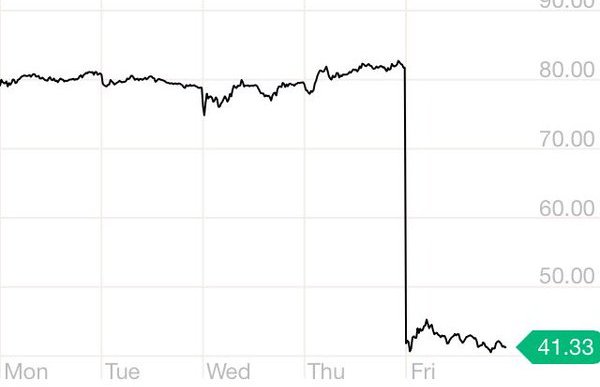 Back when I worked for the Congressional Budget Office, I was required to file an annual financial disclosure form. I totally hated it. I had to document every stock holding, 529 account, savings bond, my spouse’s income, everything. And even though the rules were oftentimes confusing (and kept changing every year), I do understand why public employees (especially ones who are elected to office) need to disclose potential conflicts of interest.

But the data visualization field doesn’t seem to have any means or requirements to make such disclosures. And I wonder whether it should.

This became clear to me a couple of weeks ago when, upon announcing a weaker a forecast for the first quarter of 2016 than anticipated, Tableau’s stock fell by more than half overnight, opening at $41.92 on February 5th after closing the previous day at $81.74 (it was at $125 in late July). Other companies like Qlik and Salesforce also lost value, but not to nearly the same extent as Tableau.

There was some robust discussion in my Twitter feed about Tableau’s current and future prospects. Many were heading out to buy Tableau stock, thinking it was vastly undervalued at half its earlier value. (Personally, I do believe that Tableau faces some significant long-run challenges because other tools like Qlik and PowerBI are improving quickly and are going to be able to more aggressively compete for Tableau’s market share; but that’s probably a different post. Here’s an interesting Reddit on the different tools.)

The stock drop, and people’s reactions, led me to consider this question: Should members of the data visualization community disclose their relevant financial holdings? Is it a conflict of interest if someone owns company stock that creates a tool they promote?

There is probably a line here, right? Someone who writes blog posts about how to create a new visualization in Tableau, for example, clearly likes Tableau. And they have an incentive to see that Tableau is successful, because they want the tool to continue to improve and/or they want to reap the rewards from any personal financial investments. But they are being up front that they prefer that tool, so maybe there is no conflict. That being said, I write Excel tutorials all the time, but don’t own any Microsoft stock outright (unless it’s bundled in some of my index and mutual fund holdings).

What about the person who teaches data visualization and has the power to influence whether his or her students purchase a specific tool (for themselves or through their employer)? Or someone who writes books or blogs or other articles about data visualization? Does writing about tools and products mean that an author should disclose their financial holdings?

I don’t have the answer and I’m not suggesting that we need some sort of managing body to be a clearinghouse for disclosures, but I do wonder whether we need to start thinking about these potential conflicts.

So here’s my current financial disclosure: I bought a bit of Tableau stock two weeks ago in what I plan to be a short-term position. I don’t individually hold stock in any other companies specific to data visualization. And, as you’re probably aware, the Maryland Institute College of Art (MICA) and Juice Analytics are both sponsors of The PolicyViz Podcast.