A Visualization Mapping: Form and Function 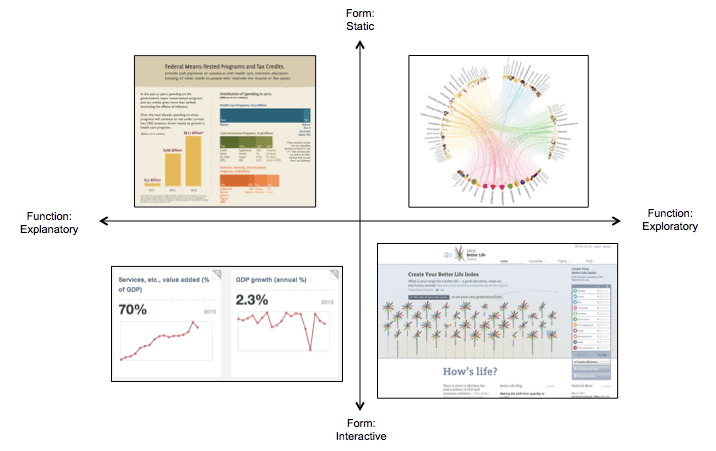 I’m really excited to announce that I have just published an article about data visualization in the Winter 2014 edition of the Journal of Economic Perspectives (JEP). The JEP is one of the premier economics journals and I am thankful to the editors for inviting me to write the piece and for recognizing the growing importance of data visualization in the field. The following post is adapted—with some edits for space and context—from the published article.

When I think about the different types of data visualizations and the audiences they try to target, I think in spectrums or axes. On one axis, consider the connection between the two general forms of visualization.

Sitting somewhere between the two are animated visualizations. These types of visualizations—such as movies or online slideshows—do not necessarily permit the user to manipulate data points to create alternative results, but they do enable the user to control the pace of the story.

On the other axis, consider the function of the visualization. The intersection of the axes results in four quadrants:

You can use the relationship map I’ve described here to help you think carefully about how your audience will use your visualization and how it fits their needs.