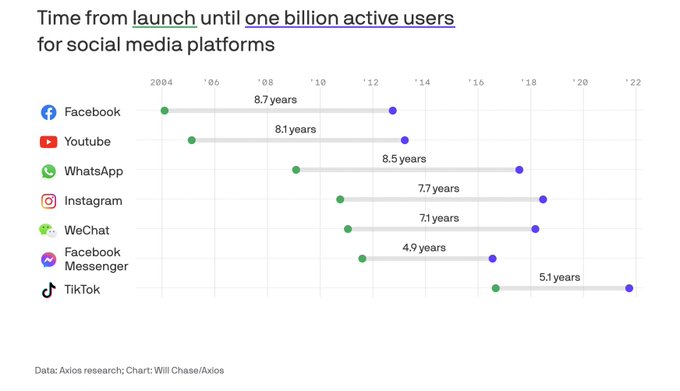 Will Chase at Axios published what I think is a lovely dot plot a couple of weeks ago.

A chart I made for @axios. Good example of a relatively simple chart where lots of little details make a big difference in readabilityhttps://t.co/qIDylNcR3j pic.twitter.com/NNGhsAM0XD

The graph has four main things that I really like:
1. The color of the dots matches the underlines in the title, easily integrating the whole thing together.
2. The labels on the spans connecting the two dots makes it easy to get the exact number of years.
3. The icons on the left next to the text labels gives immediate recognizability.
4. The gray text labels for the years along the horizontal axis (e.g., ’06) are easy to read.

I tweeted out my appreciation for Will’s chart and a subsequent conversation started about people’s preferences for where to place the vertical axis labels. Some people like them aligned along the left while others some like them placed right next to the dots. Alex Selby-Boothroyd at the Economist wrote an article about the same content a few days later and placed the labels directly on top of the linking lines.

Will’s comment in the Twitter discussion is a good one—placing the labels next to the dots makes the chart less scannable and isn’t as aesthetically pleasing because they are not aligned.

I’m not a big fan of that style because I think it 1) makes the chart less scannable, 2) less aesthetically pleasing because of lack of alignment

I would argue that this isn’t always the case, however; take this New York Times dot plot. With this many dots and the wide variation in the data, the dots end up creating a steep diagonal gradient. In this case, having the state labels next to the dots is useful and makes it easier to connect them with the data. (Also notice the use of integrating the colors of the dots directly into the chart title.)

Although it’s an unsatisfactory answer, where you place your labels on your dot plots depends on the content and the overall shape of the data. I think either technique works in the Axios/Economist example, as would just placing the labels next to the dots. In cases where you have more data or the data end up following a particular shape, this decision is probably more important.

Personally, I tend to prefer putting the labels next to the dots as I think it’s easier to read the labels and dots, but I really like Will’s approach and is one I’ll more strongly consider going forward.

If you’re wondering, yes, you can take all of these approaches to labeling a dot plot in Excel. I’ve posted a new video tutorial on my YouTube channel if you want to learn how to do so.