The Ten Most Misleading Charts During Donald Trump’s Presidency 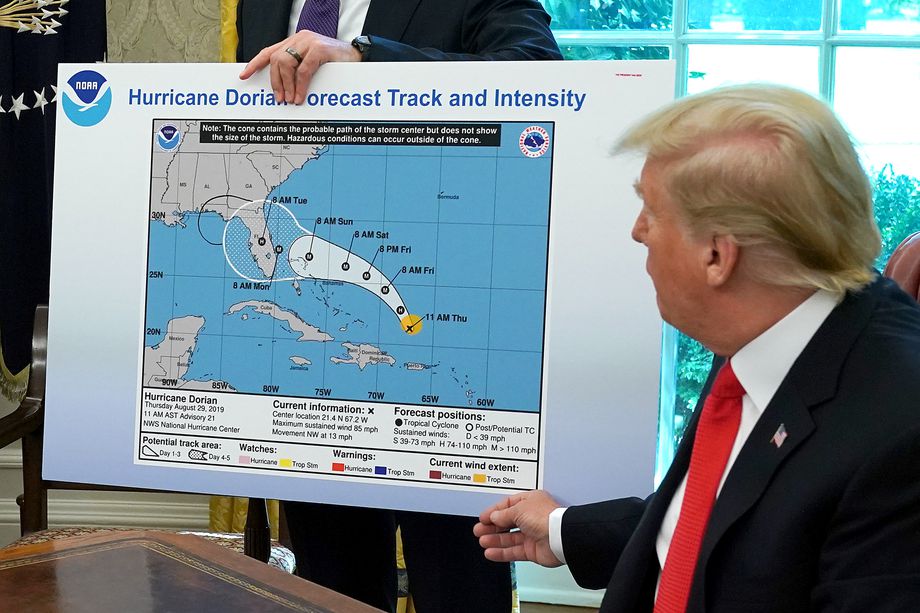 Over the course of four years as President, Donald Trump made more than 30,000 false or misleading claims, according to the Washington Post Fact Checker. It should be no surprise, then, that some of these took the form of data visualizations. Here are the top ten most misleading charts, graphs, maps, and tables from the Trump Administration over the past four years.

Who can forget Sharpiegate? In September 2019, as Hurricane Dorian was approaching the United States, Trump tweeted that in addition to Florida, “South Carolina, North Carolina, Georgia, and Alabama will most likely be hit (much) harder than anticipated by the storm.” He was apparently wrong about Alabama because the Birmingham National Weather Service offered a public correction.

Not to be proved wrong, the President showed a doctored map of the Hurricane’s path, extending the illustration towards Alabama in black Sharpie. Of course, we don’t know who drew the “Sharpie Cone of Uncertainty” but the National Oceanic and Atmospheric Administration (NOAA), the agency that publishes the official hurricane tracking maps, usually doesn’t draw extra paths on their maps.

After the president won the 2016 election, he apparently loved to show and hand out pictures of the election map. The fact that the map makes the country look red supported his claim of a “massive landslide victory.” Of course, land doesn’t vote, people do, so the map doesn’t represent the true number of votes the president received. And, to wit, he lost the popular vote again in 2020.

A lot of government programs continue without specific authorization from Congress or the president. But without any action from policymakers, spending on those programs would, in real terms, change owing to inflation and population growth. Thus, showing raw dollar figures spent on a large government program, such as Medicaid, is going to naturally show increased spending over time.

When the president tweeted out this charge that Democrats were misstating Medicaid spending under the GOP-led Senate spending bill, he wasn’t showing the whole story. In fact, Vox compared the GOP proposal to baseline spending to show that the Republicans’ proposal would cut spending by about $160 billion, as you can see in the second graph below.

4. COVID projections from the Council on Economic Advisers

As infections and deaths from COVID spread across the country, the president’s Council of Economic Advisers (CEA) sought to project what would happen over the next few weeks and months. Their “curve-fitting” exercise used a cubic model that showed a precipitous decline in COVID deaths, which was misleading at the time and, needless to say, terribly wrong in hindsight.

When the economy went into freefall because of the COVID pandemic, the president needed to find some good news. The April jobs report showed a loss of more than twenty million jobs, affecting a wide swath of Americans. As the shock of the pandemic settled in, the May jobs report showed a gain of 2.7 million jobs. In turn, the president tweeted out this graph claiming that the May job increase was the largest on record. That’s true, but if I gave you $20 today and you gave me back $2.70 tomorrow, I wouldn’t be too happy.

A more accurate graph would show the month before the largest job gain. This next graph (which I wrote about in June 2020) adds this previous month, which gives perspective and context on these job gains.

Still trying to provide some optimism to a reeling economy, the president continued to argue that there was a “jobs boom” across the country following the huge job losses in April. Unfortunately, as Alberto Cairo explained to NPR’s Marketplace, “the line chart exaggerates the difference, because you were down there and now you’re here, and that represents a huge change. But the change is not that big. It is more clearly represented through a bar graph with a zero baseline, and bars going down or going up.” (I also wrote about this graph.)

Early on in the COVID pandemic, the president argued that the higher number of cases in the United States was due to higher rates of testing. At an April 6, 2020, Coronavirus Task Force Briefing, the president claimed that testing was “going up at a rapid rate.” While testing was increasing over that time period, the graph makes it look like that the number of tests was growing exponentially. In fact, the graph is showing the total cumulative tests performed, not the number of new tests each day. Carson MacPherson-Krutsky wrote a great piece on this in July 2020 at The National Interest.

President Trump’s interview with Fox News’ Chris Wallace in July 2020 forced the interviewer to offer a rebuke of the president’s numbers claiming that the US COVID mortality rate was the world’s best. The chart the president used compared the United States to just six other countries that showed the case-fatality rate and not the mortality rate. While the mortality rate is a pretty straightforward number–the number of deaths as a share of the total population–the case-fatality rate is more complicated and also not entirely valuable for cross-country comparisons in the middle of the pandemic. The case-fatality measure is the number of deaths divided by the number of confirmed cases, which will vary based on testing (which obviously differs greatly across countries) and where we are in the pandemic. Researchers have shown that the measure is basically unknowable until after the pandemic ends when we will know the full death toll.

In an August interview with Axios’ Jonathan Swain, the president tried over and over to show the United States was succeeding against the virus. Claiming that cases, hospitalizations, and deaths were all lower in the United States than in other countries around the world. Swain wasn’t having it: “I’m talking about death. It’s going up.” Roger Sollenberger at Salon.com has a nice summary of the interview and the president’s “many colorful charts.”

The president always enjoyed touting his own polling numbers—when they are positive. He regularly claimed 90-plus-percent approval ratings in the Republican party without offering any sources for the numbers.

Philip Bump of the Washington Posts compiled all of those tweets to create this graph. Bump noted that “unlike any real poll number, the figure never goes down, only up. This is as good a sign as any that Trump’s just making this up.” Misleading graphs and charts are one thing; making up the data is another.

So, maybe the president’s tweet is a fairly useful graph/number in the sense that it clearly shows the data, but the data behind it are made up!