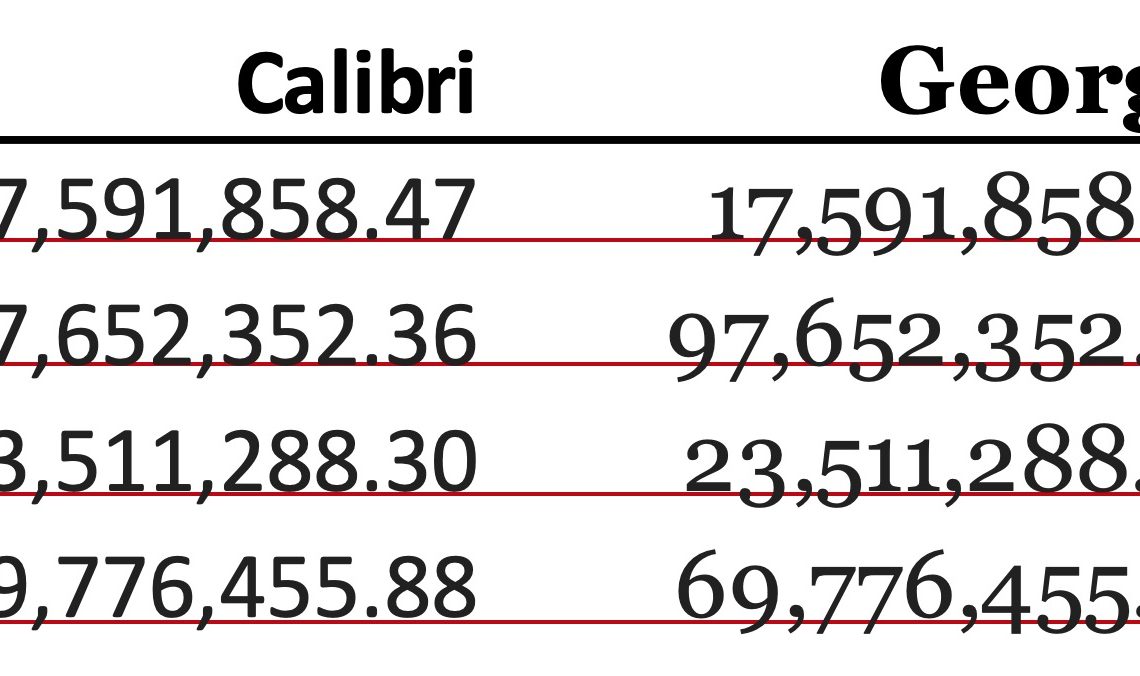 Like color, choosing a font can be a difficult decision for even the most seasoned designer. As one who is definitely not a typographer, I will usually seek help from others to guide my font selection. Given that I’m usually presenting data or numbers, I prioritize testing my fonts with numbers, not just letters. Nearly every online font-picking tool gives you the option to type in The quick brown fox jumps over the lazy dog (because it has every letter in the English alphabet), but a list of numbers is not always a default. (I’ve listed a few of my favorite font tools and books at the bottom of this post, if you’re interested.)

Why is this important? Let me demonstrate how different fonts may not be aligned vertically or horizontally using five different fonts: Calibri, Lato, Karla, Cabin, and Georgia. Here they are in a standard table with four different numbers.

Now let’s draw a vertical line along the comma. It should be an important aspect of your table design to keep the numbers aligned along the comma/decimal. This will make it easier for your reader to find the smallest and largest numbers, and to navigate the table more generally. In this example, notice how the numbers are nicely aligned in Calibri and Lato, but poorly aligned in Karla and Georgia.

What about horizontal alignment? Let’s draw some more lines. You can again see how the first four all sit on the same red line, but the numbers with the Georgia font (the only serif font in the group) drop below the baseline. Style wise it might look nice, but it is uneven along the top and bottom horizontal lines, which we probably want to avoid to make it easier for the reader.

As you pick your fonts, be sure to test your numbers too.

Some of my favorite font tools

Some of my favorite font books

Just My Type: A Book About Fonts by Simon Garfield