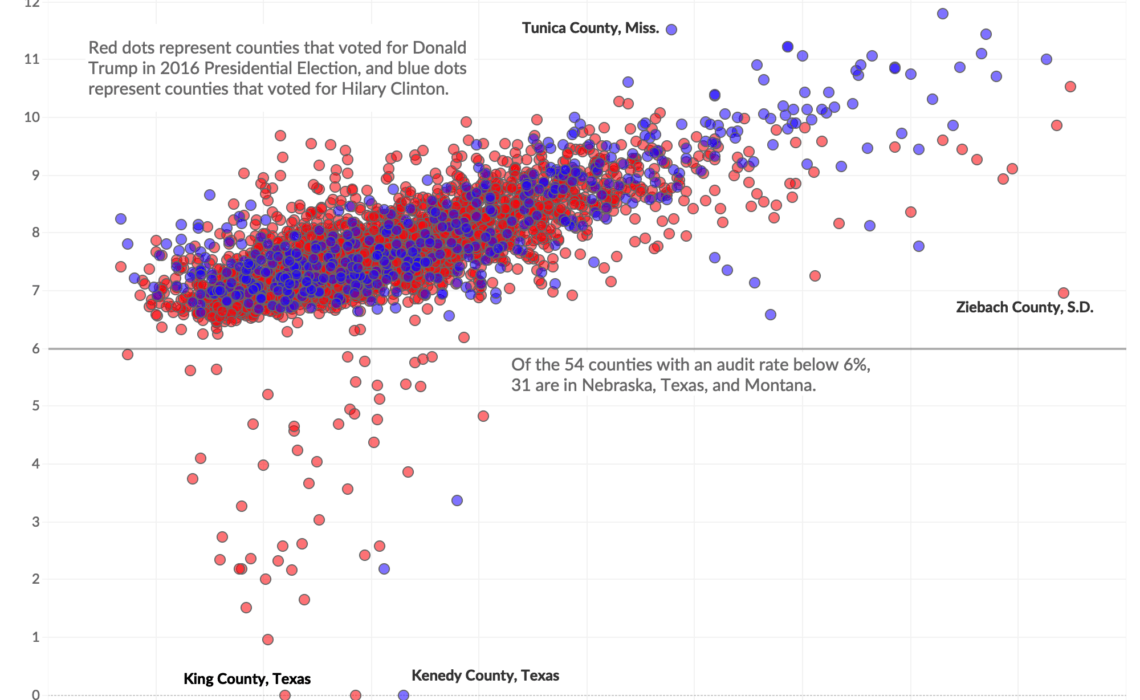 Paul Kiel and Hannah Fresques at ProPublica wrote this really interesting article a few weeks ago about the geographic distribution of Internal Revenue Service (IRS) audit rates. They found that states with the lowest audit rates “tend to be home to middle income, largely white populations.” Using data tabulated by former IRS senior economist Kim M. Bloomquist, they created two county-level maps of the IRS audit rates, one that shows counties are audited at a higher rate than the national average and another that shows counties that are audited at a lower rate.

The maps remind me of this great piece from the Washington Post that uses a pair of tile grid maps to examine the relationship between state-level suicide rates and gun ownership rates. As much as I liked those maps and these ProPublica maps, it’s really difficult to see the relationship between audit rates and, say, incomes across the country. I thought a scatterplot might be another visual that would help show this relationship in a clearer way.

Paul and Kim very nicely sent me their audit rate data—which they have now made publicly available—and I grabbed the poverty rate for each county from the US Census Bureau. Using Tableau, I created a scatterplot where the circles are all equally-sized and a bubble plot where the bubbles are sized according to population (data again from Census). I don’t love the bubble plot because the small counties become really small (even if you use logs). In both cases, you can see the positive relationship between the poverty rate and audit rate, which is harder to see in the maps.

Because part of the ProPublica article mentions the two major US political parties, I also layered on the political leanings of each county by adding colors–red for counties that voted for Donald Trump and blue for those that voted for Hillary Clinton in the 2016 US presidential election (voting data from Tom McGovern’s Github page).

As you can see, all but three of the counties below a 6% audit rate voted for Trump. Many of the counties in the top-right part of the space are blue, but they tend to be fairly equally distributed elsewhere in the space. I also added some labels to highlight some of the obvious outliers and also added a couple of annotations to help explain what’s going on in the graph.

I don’t view this scatterplot as a replacement for the two maps in the original ProPublica story, but perhaps as an additional perspective that can help readers more clearly see the correlation between the audit rate and this measure of poverty. That being said, perhaps many readers would have a hard time reading this scatterplot and it would just clutter the story. In either case, it was a fun exercise to play around with the data.