MLB Salaries Are Yet Another Way to Visualize Growing Economic Inequality 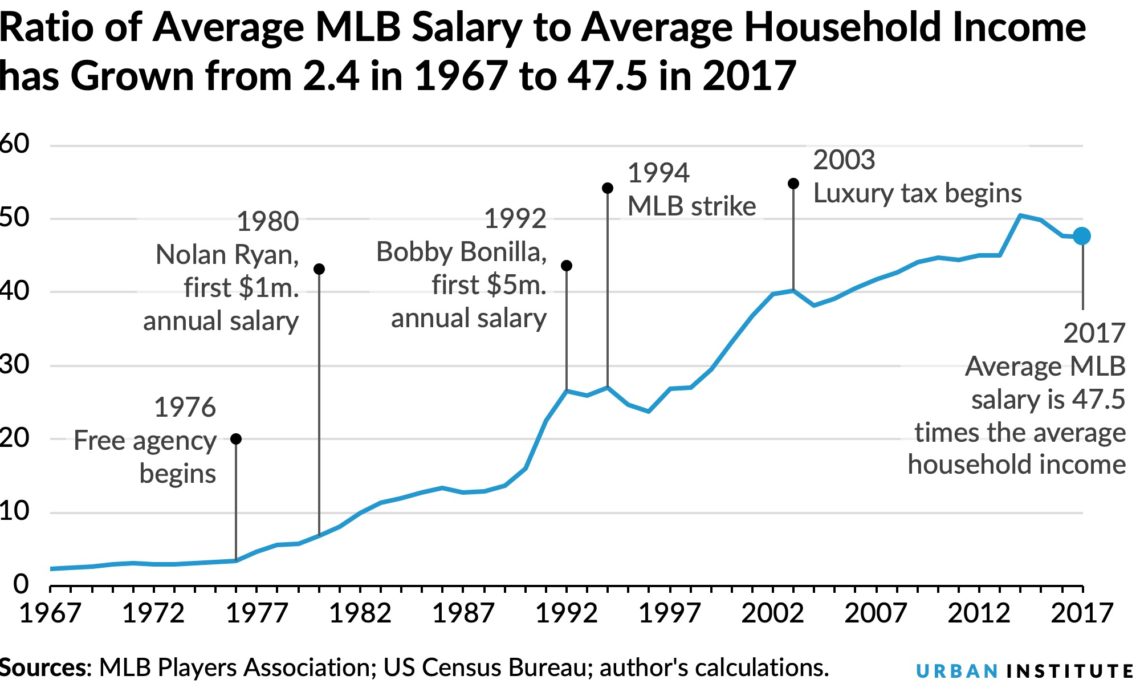 This post was originally published on the Urban Institute’s blog, Urban Wire on March 20, 2019.

Major League Baseball’s (MLB) Opening Day is less than two weeks away. For fans like me, it’s a glorious day of blue skies, green grass, and white baseballs with red stitching. For players like Mike Trout and Bryce Harper, it’s time to start driving in runs and helping win games.

The growth in MLB average salaries can be tied to various factors. The introduction of free agency in 1976 appears to be a big turning point (the introduction of free agency is an interesting story itself). Player strikes, salary arbitration, and revenue growth from new ballparks and TV have also played an important role over the past few decades.

Growth in salaries escalated after the players’ strike in 1994 but then slowed after the luxury tax was introduced in 2003. (The intention of the luxury tax is to prevent wealthy teams from outspending their less lucrative competitors and has led some to argue it has turned into a “de facto salary cap.”) Between 2003 and 2017, the average MLB salary grew by 29 percent, still faster than the 9 percent growth in average household incomes.

Comparing MLB players’ salaries with average Americans’ is just one way to grasp the growing divide between the wealthiest Americans and the lower and middle classes, which Urban Institute researchers have studied and explained.

Income inequality may receive a lot of popular media attention, but wealth inequality is actually greater than income inequality, and wealth inequality has worsened over the past 50 years. My colleague Signe-Mary McKernan has shown that in 1963, high-wealth families— those whose wealth ranked at the 90th percentile — had $6 for every $1 in wealth owned by the typical middle-class family. By 2016, they had $12.

A recent study by the Federal Reserve Bank of Cleveland suggests that income gaps are the primary driver behind the racial wealth gap. The study found that the average wealth of households with a head identifying as black was $140,000 in 2016, while the average for white-headed households was $901,000, nearly six and a half times greater.

Wealth inequality matters to everyone and affects generations of families. If you own a home, that wealth can be passed on to your children, but if you are unable to purchase a home because of systematic discrimination, for example, that affects not just you and your family but also the generations that follow.

Urban researchers have also examined the short- and long-term effects of debt on wealth and inequality. Having debt in collections can lower households’ credit scores, which can have a deep, long-lasting effect on their finances and make it harder and more expensive to access credit.

Debt in collections can results from unpaid bills, including medical bills, utility bills, and even parking tickets. Student loans—and gaps in such loans between racial and ethnic groups—can also exacerbate existing wealth gaps.

We’ll likely see many proposals to address income and wealth inequality as we head deeper into the presidential election season (though, probably not as we get deeper into the baseball season).

The debate over how best to combat increasing inequality—from training a skilled workforce to applying new technologies—will continue. As the conversation progresses, Urban researchers will provide evidence and insight to help guide the way.