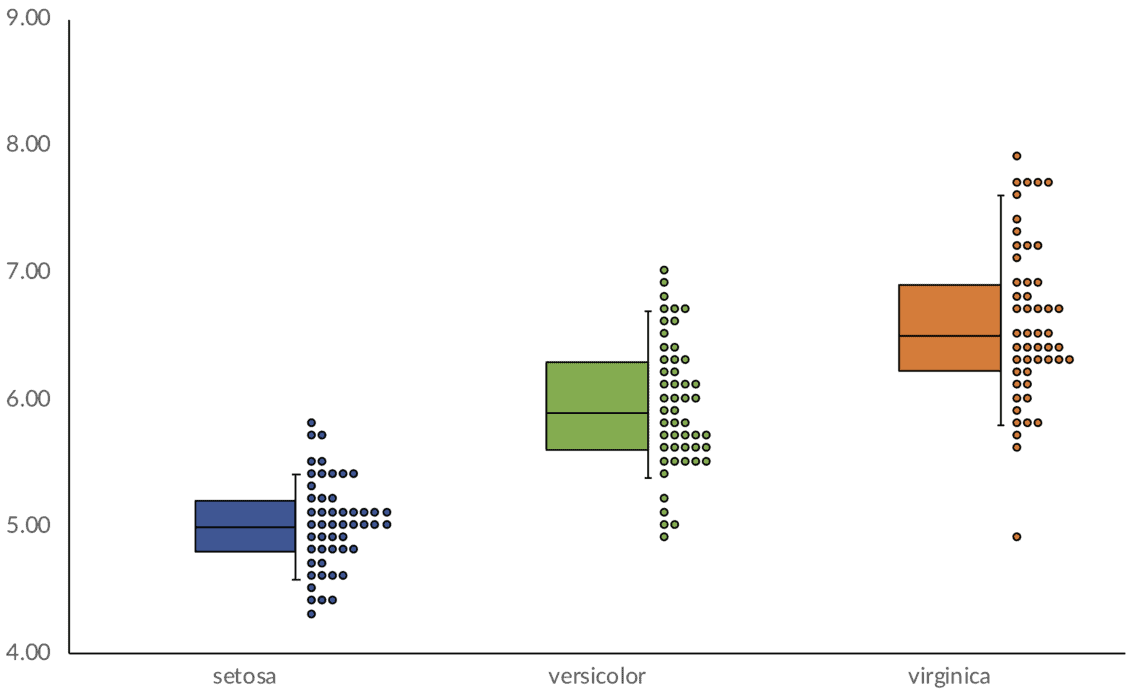 This graph popped up in my Twitter feed a few weeks ago. I have no idea what I’d call it—a box-and-whisker-and-scatterplot chart? I’m also not sure whether it’s better than a violin chart, which shows the entire distribution, but it’s certainly intriguing. In my mind, visualizing distributions and uncertainty is a big data visualization challenge. It may be because many people simply don’t understand statistics and distributions, nor do they understand the mathematical concept of uncertainty and how it can be introduced into data and mathematical or statistical models. Perhaps the big issue about visualizing distributions and uncertainty, therefore, is that they require more significant annotation to help explain not just how to read the graph, but what is being graphed.

Anyways, I digress. I wanted to make this graph in Excel. I haven’t yet had a good excuse to try the new box-and-whisker chart type in Excel 2016, so I thought this was my chance. It turns out, however, that you can’t combine it with other chart types, so I had to use a different approach, one that combines three different elements:

As usual, I try to set up my Excel file so that this can be more easily replicated with other data later on. It takes a little longer to build the initial chart, but that will pay off with time savings later on. I’m going to calculate five percentile points from the data directly in Excel. This works here because I only have 50 observations; if I had a larger dataset, I would make these calculations in Stata or R and bring them over. The percentiles are calculated below the orange header row in the screenshots using the PERCENTILE formula. In cell I3, for example, I have:

This looks in the data column (A2:A51) and looks for the percentile point specified in cell H3. 2. The scatterplot for the whiskers

To add the whiskers on the right edge of the boxes, I’m going to add a scatterplot point and then add a vertical error bar to denote the 10th and 90th percentiles. The scatterplots require x- and y- values, and are shown in the green section of the worksheet.

The y-values are simple—they are equal to the 50th percentile and thus the equation points to the original in the orange section above. For the x-values, I need to find the right-edge of each box, and while I’m sure there is some rule to how to find it, I experimented and it turned out to be 1.15, 2.15, and 3.15.

With the scatters plotted, I then added the error bars, the data for which are shown in the blue area. Because the whisker will reach up to the 90th percentile and down to the 10th percentile, the length of the lines will be equal to the differences between the median and those percentiles.

3. The scatterplot for the data points

The final element to plot is the dots representing the data. The data are shown in the gray area of the worksheet, with the original data in the columns with all capital letters. The actual data will be encoded to the y-axis of the chart, and they need to be assigned different x-axis values so they don’t sit on top of each other. Basically, the goal is to create a kind of unit-histogram of the data points and separate them enough to make them visible. The COUNTIF counts the number of occurrences of the cell in column A by looking at the values from the top of the column down to the specific cell of interest. For example, the formula in cell B3 is =COUNTIF($A$2:A3,A3), which counts the number of times “4.4” shows up in just those two cells. Looking further down, the formula in cell B13—the first occurrence of 4.8—is =COUNTIF($A$2:A13,A13). (And, yes, by adding the absolute references—the dollar signs—to the first argument here, I can simply drag the formula down the column.)

With the ordering set, I need to set up the x-axis values for each point. I start by first setting some fixed references. In cell E1, I set a value of 1.195, which is the position along the x-axis that is just to the right of the whisker. I chose this value because it looked like a good distance from the line, but I could have chosen something else. The 0.03 value in cell E2 is the horizontal distance between each dot. Other values could work, and I played around with some of them, but this worked for this chart.

We now pull it together and define the x-position of the scatterplot in column D. I use a little IF formula here to position the points to order or stack them. The formula in cell D2 is:

So, if the data value is the first in the group, I assign it a value of 1.195—the point closest to the whisker. All of the data points that are first in each group will get this same value and will thus line up vertically in the chart.

This whole data series is pulled back into my main worksheet and placed next to the original data points. I can now plot this as a scatterplot and am all set. I color and add an outline to match the box.

I’m not sure if this is a better approach than a violin plot but calculating kernel density estimates in Excel is something I’m not tackling just yet. This graph approach—which combines the box-and-whisker with a plot of the actual data—has some nice appeal in that you get both the entire distribution and summary percentile points.

I don’t know how well it would work with more data, but for something small like this, I think it can work. Depending on the audience, it might require more annotation to help explain what each element represents and how to read it.

What do you think? A good chart type? Worth trying elsewhere?