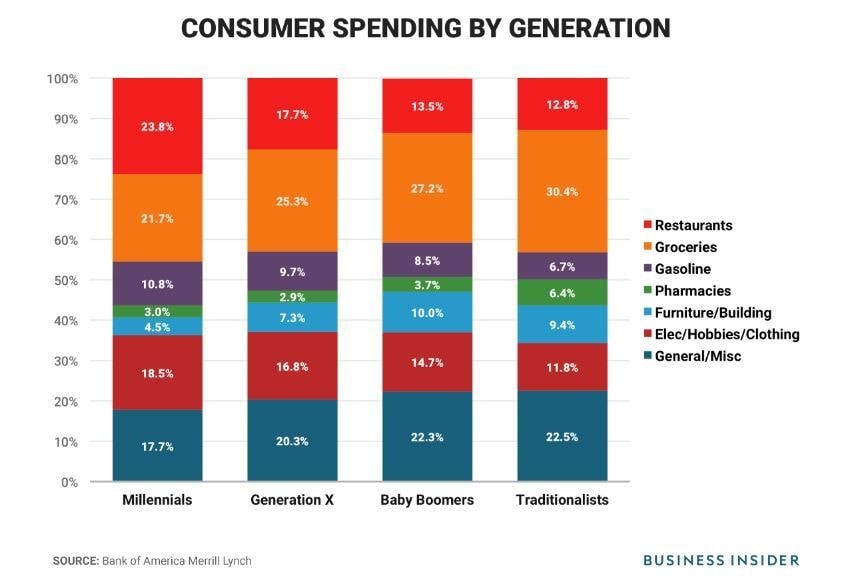 Take a look at this stacked column chart from Merrill Lynch and reposted by the World Economic Forum. By itself, it’s a pretty basic chart that shows the distribution of spending across seven categories by four generations of Americans. On its own, there are some basic things I might change, but I don’t think they are major critiques:

Those are all small things I would change. When I look at the text around surrounding the chart, however, it leads me to think about bigger changes I might make. Let’s look at that text:

Notice the focus on three categories: Restaurants, Groceries, and Electronics/Hobbies/Clothing. If that’s the real focus, then we can probably highlight just those three categories and deemphasize the others. Something more like this: I still left it as a stacked column chart, but made the other series gray with a white outline. I left the number labels off those series as well. This addresses my 4th point above and removes some of the colors to help simplify the chart. I also added the 50% and 100% gridlines to help show that the three categories of interest sum to just more than 50% for Millennials and sum to just about 50% for the Baby Boomers and Traditionalists.

As with any stacked chart, it becomes difficult to compare any segment that does not share a common baseline. Here, it’s easy to compare across the four values for Restaurants (and General/Misc. at the top), but it’s much harder to do so for the other groups. Using the same color palette and overall approach, I tried breaking this chart apart. I don’t love this. With all the horizontal baselines/gridlines and white space, it feels very busy to me.

As a complete alternative, I tried plotting the data as a line chart. We’re effectively dealing with time series data here, so  a line chart is still appropriate. I again highlight the three series discussed in the text and set the other ones to gray and push them to the back. The obvious tradeoff here is that you can easily find the trends in those three series, but you don’t get the part-to-whole relationship the way you do in a stacked column chart. Finally, what about pie charts? As I wrote about a few weeks ago, I’m loosening my personal stance on pie charts. If I want to focus on how these three segments sum to a value around 50%, then pie charts might actually work. On the one hand, it’s much more difficult to compare the individual segments between the generations. Here’s a test: In which graph, the pie charts or line chart, is it easier to see how much spending on Restaurants has changed from the Millennial to Traditionalist generation? No question, right? It’s much harder to do this with the pie charts than in either the line chart or stacked column chart. On the other hand, I can more quickly see that Millennials spend more than half of their budget on these three categories while Traditionalists don’t. So it depends on the goal.

One final thing: I’d replace the title with a more active, descriptive title. Instead of “Consumer Spending by Generation,” which doesn’t help support the point made in the text, maybe something more along the lines of “Millennials spend more at restaurants while older generations spend more at grocery stores”? It’s basically a rewrite of a sentence from the text to be a bit more concise and active.

What did I miss? What do you like? What might you make? Here are the data, so give it a shot and let me know what you come up with.