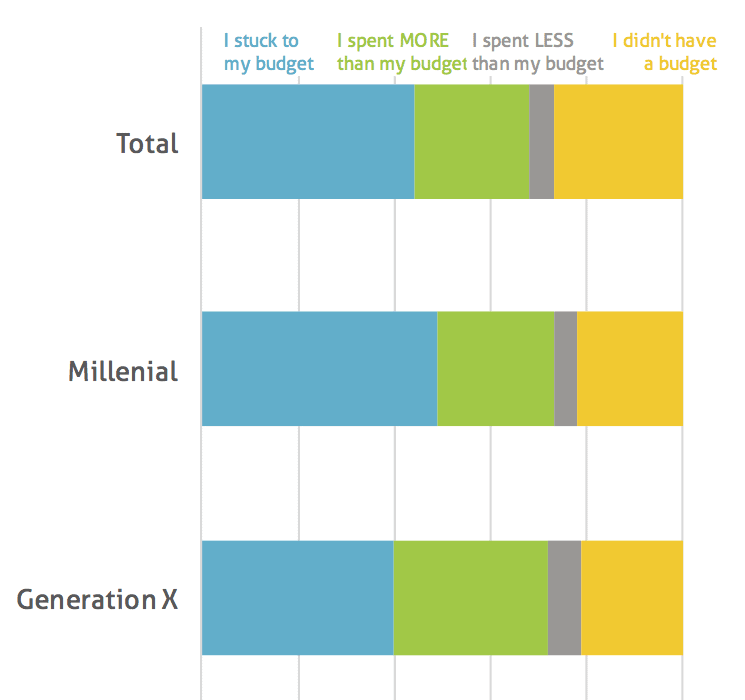 My friend Ann Emery posted this tweet over the weekend:

Coffee convo with the non-datanerd hubby: Can you remake this? This is hard to read, right? 4 groups, I can’t tell what’s supposed to add to 100%, & they ran out of space & had to twist the letters. (He has no idea that clustered columns are my least fav graph of all time. ❤️) pic.twitter.com/SUbDrZ5Zkd

It doesn’t look like Ann wanted to remake this graph, so I took a shot. -Okay, this graph is clearly hard to read. Not only do the x-axis labels not even fit, but it’s really hard to compare across the four categories. As Ann notes, it’s hard to quickly tell that the numbers sum to 100%.

-As I started to think about my remake, I restricted myself to using the exact same dimensions as the original.

-I thought a four-pack of stacked bar charts would be a better approach. Because the data sum to 100%, the stacked bar charts all fit nicely in this single, vertical layout. I guestimated the data values and organized them by generation, not by answer.

-I considered breaking the bars up and giving each their own vertical baseline so that it would be easier to compare each answer across the four groups, but it doesn’t quite fit as nicely in this particular layout.

This was a quick remake. What do you think? Give it a shot; here’s my data file.