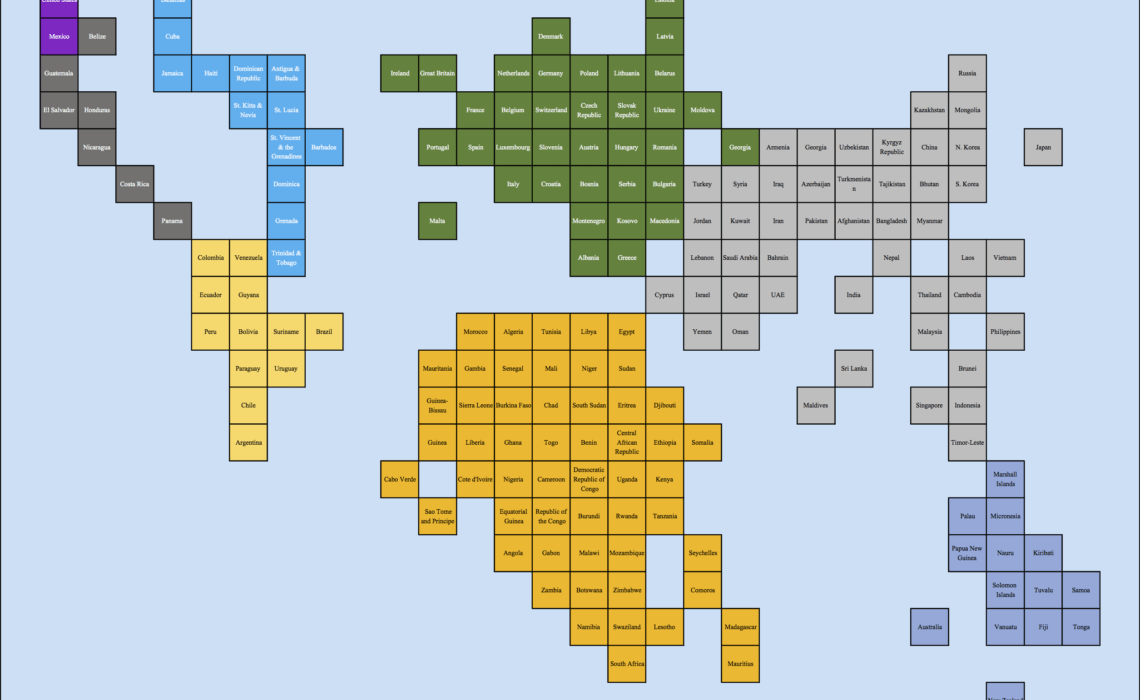 If you regularly visit this site, you know I’m a big fan of Tile Grid Maps. They are relatively easy to make (in Excel, at least), engage readers in a different way, and address some of the issues with traditional choropleth maps (though introduce their own issues).

Following up on the Tile Grid Waffle Chart Map I made of Africa a few weeks ago–and a tweet by a certain Ann Emery–I decided to sit down and try to make a Tile Grid Map of the entire world.

Has anyone made a #TileGridMap of the entire world yet, @jschwabish? (@visualisingdata, want to add this to your to-do list please? ????)

I’ll admit, it was harder than I thought. For one, I’m no geography expert. Second, some countries have really weird shapes–Vietnam is super long. And third, getting the squares in just the right layout was really hard. If you dig into your area of the world, I’m 100% sure you’re going to find something to argue with me about.

In the end, I’m not even sure this is a useful visualization type. Take the case of Russia. In case you don’t know, Russia is a HUGE country. A quick Google search yields the following estimates of square miles for the five largest countries in the world:

In other words, Russia is nearly as big as Canada and the U.S. combined! Have you looked at a world map lately? Russia stretches from eastern Europe, past China, nearly to Alaska!

So is a map where all countries are equally-sized squares being fair to a country that’s so large and spans such a wide area of the planet? I’m not sure. On the one hand, it actually makes the point stronger–visualizing data for which the value for Russia is not meaningful, the WorldTGM minimizes the visual space Russia takes up on the map; instead, it allows emphasis to be placed on other countries for which the variable may be more meaningful. On the other hand, it dramatically changes the visual of the world and makes placing the tiles in reasonable proximity to each other virtually impossible.

Anyways, I’m providing my version of the WorldTGM in Excel format here. Because someone asked, I’m releasing this file for free under a CC-BY-SA license, which means you can use and adapt it, as long as you give attribution and share your version under the same licensing.

You can download the file and move the squares around to your heart’s content. If you come up with an alternative, please post it below–I’d love to see the different versions! And maybe Jane Pong can make another cool animated gif of the different approaches!

I’ve also made a version that pulls in real data, and am now working on the labels; I hope to have that out in a few weeks. In the meantime, enjoy this one!

UPDATE: Mustafa Saifee‏ has converted the World TGM to a JSON file, which you can get from his Github page here.