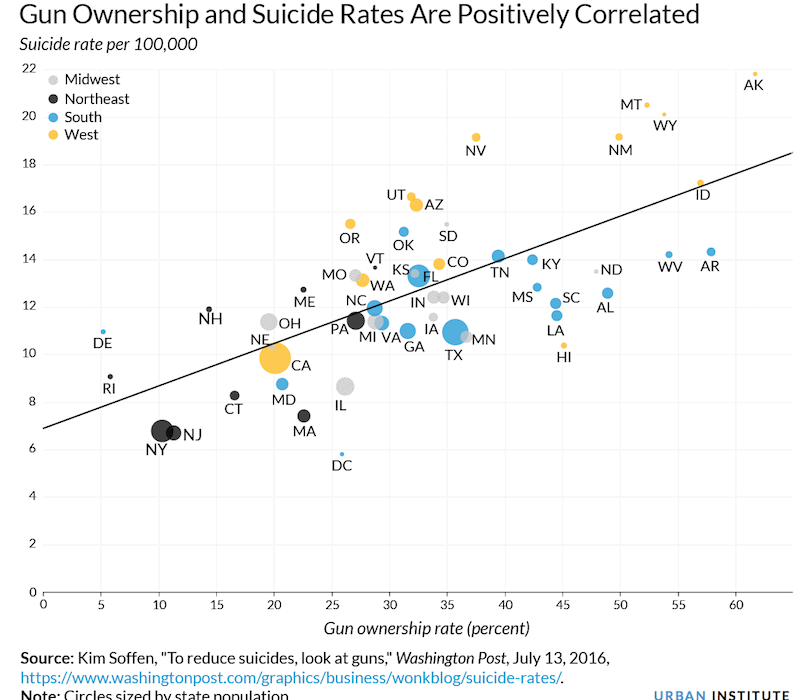 On Wednesday and Thursday, the Urban Institute published two posts on gun violence in America I co-authored with a colleague (post #1 and post #2). One of the data visualizations in the first post was inspired not by the issue per se, but by another visualization I saw in the Washington Post that I thought did not adequately visualize the story they were trying to tell.

Importantly, on content: One of the points we made in our first post is that of the more than 30,000 firearm-related fatalities in the U.S. in 2010, about one-third (11,000) were classified as homicides while the remainder—more than 19,000 deaths—were classified as suicides.

When I started looking into the literature on suicides, I came across this interesting Washington Post article in which the authors argue there is a strong correlation between suicides and gun ownership rates. To visualize the point, they present two side-by-side tile grid maps. As you may know, I’m both a lover and hater of maps. I think maps are terribly overused to visualize data—geographic size tends to distort the data (which is why I tend to have an affinity for tile grid maps) and more often than not, the geographic patterns do not exist or are not completely obvious. More importantly, it’s more difficult to discern differences in quantities from color than from other shapes such as bars or columns. That being said, people love maps—they are a familiar shape and can help make the data more accessible and familiar.

In this case, however, the two maps do not help visualize the correlation between the two series, as the authors note in the paragraph that precedes the maps. I remade the two maps as a scatterplot (thanks to Ben Chartoff for pulling the WaPo data), sizing the circles by population and coloring them by region. (I made another plot in which I colored the circles by the Democrat-Republican vote in the 2012 Presidential Election; both versions are available in this Tableau workbook). In this version, the correlation becomes clear and the regional patterns are easier to see. In sum, try to be careful with maps. Just because you have geographic data does not mean you should make a map. Or maybe you should combine the map with another graph type that enables the reader to accurately compare the data values. Consider the story you are trying to tell and whether the map actually helps the reader.

What do you think? Is the original sufficient, or do you like the scatterplot or some other visualization type? The data are available here. Give it a try and post your visualizations in the comment section below or on Twitter using the hashtag #PolicyVizRemake.