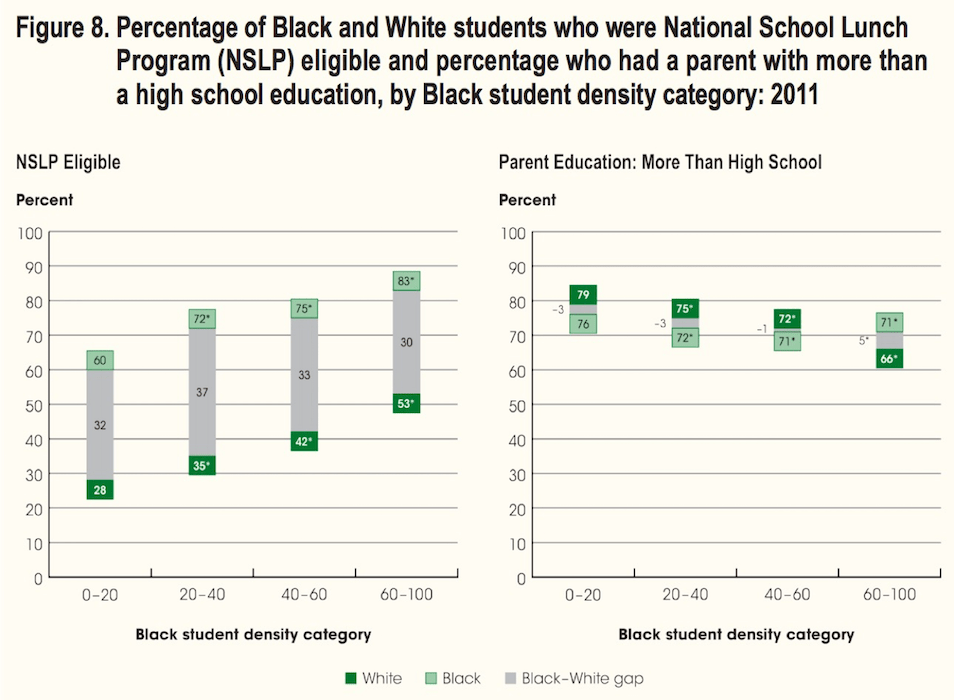 You may be aware that I have a “Redesigns” tab on PolicyViz, which consists of a collection of graphs to which I give a makeover. At some point in the next couple of months, I’m planning on taking that page down and replacing it with short blog posts.

So, to begin, in reviewing this report from the National Assessment of Educational Progress (NAEP) on the achievement gaps between Black and White students, I came across this chart.

There are a number of similar charts like this in the report. Because the chart resembles a stacked column chart, it looks like the green boxes represent a span rather than a point. I think the authors were going for a dot plot, but by using rectangles instead of points or markers, it resembles a stacked chart.

As an alternative, I remade it as a vertical dot plot. I replaced the green boxes with green circles and connected them with a gray, vertical line. I deleted the legend and instead labeled the three series directly on the first (left) chart. I didn’t repeat the labeling on the chart on the right for two reasons: First, because the gaps are smaller, there’s less space for the labels. And second, I think it’s pretty easy for the reader to hold the series names in their head when they go from the left graph to the right graph.

I sized the graphs at the same dimensions as they appear in the report. Though there is probably room to use more space, I constrained my remake to their size dimensions.

Excel Tip: I made this in Excel with three scatterplots. The x-values are 1, 2, 3, 4 and the y-values are the data points. The vertical lines are inserted as vertical error bars. And the Gap labels are added using a third series that sits between the two data points. Here is the Excel file, If you want to take a closer look.