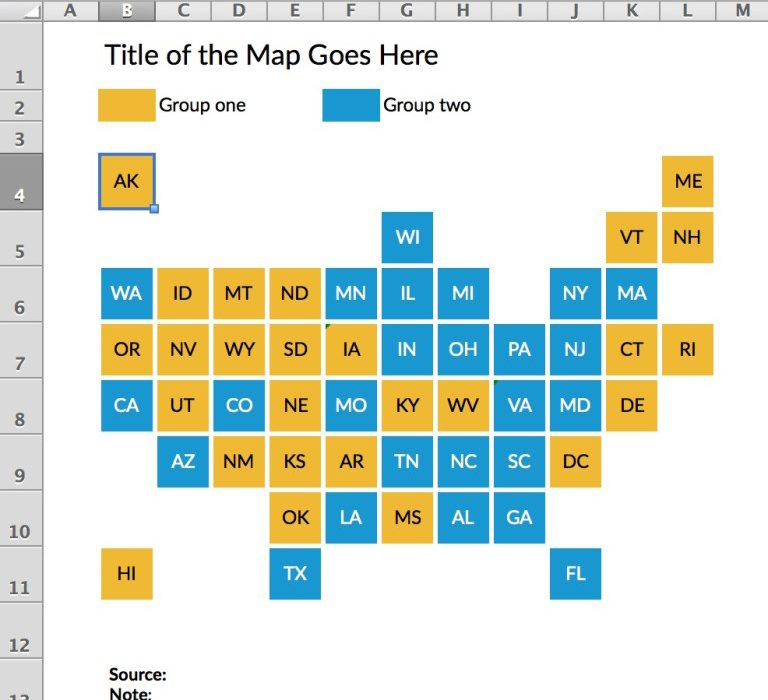 How many times have you heard someone rail against the use of maps in data visualization? The areas are not scaled to the data; geography distorts the patterns; you can’t accurately discern the quantities….

And yet, people love maps. They are familiar. We know where we live, where we’ve been, where we might want to go. Ah, but I digress….

Lately, the Tile Grid Map has become more and more popular. In the Tile Grid Map, the map areas are given a uniform size and shape—usually a square—and are arranged to approximate their real-world position. You’ve seen them from FiveThirtyEight, the Economist, the Washington Post, the Urban Institute, and many others. Danny DeBelius (formerly at NPR) wrote a great post about maps last year in which he wrote that, “Tile grid maps avoid the visual imbalances inherent to traditional choropleths, while keeping the map a quick read by forgoing the complexity of cartograms with map areas sized by a variable data point.” NPR went even further, implementing Hexagon Tile Grid Maps.

Tile grid maps can be fairly easily constructed in Excel, but require a bit of upfront investment. Of course, I’m providing you with the Excel file, so a lot of the tediousness is already taken care of; you’ll just need to insert your own data. There are basically four steps:

I’ll walk you through steps 2-4 below (step 1 is easy), but first, here’s what the worksheet looks like. The map takes up columns B-L and then off to the right, I’ve created a data table for each state (it actually uses the VLOOKUP formula to pull data from an entirely different worksheet, but that’s not particularly necessary or relevant). To the right of that, I’ve calculated the median of this series; I’ll use the median to divide the states into two groups.

Steps 2 and 3 require a bit of tedious up-front work, but once that’s done, the map can be easily replicated for different colors or different numbers of groups: I’ve created several different maps for you in this file that correspond to maps that divide the data into 2 groups (above and below the median), 3 groups (split into thirds), 4 groups (quartiles), and 5 groups (quintiles). You can easily modify the data, the map colors, and how the data are split into groups.

What do you think? Useful? Let me know if you have questions or issues and I’ll try my best to help you out.

Get the Excel file.