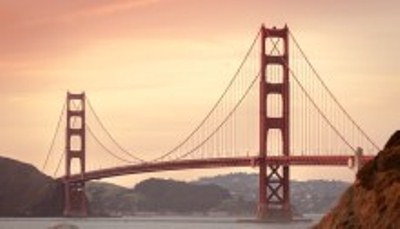 On Saturday, I head to the west coast for 11 days–the first week in San Francisco and then a few days in Seattle. That’s a long time to be away from my family, but it’s an amazing opportunity to be a Visiting Scholar at the Federal Reserve Bank of San Francisco. While there, I’ll work with co-authors on some research we are doing on the Disability Insurance program and I’ll spend considerable time teaching and consulting with Bank employees on data visualization and presentation techniques and design. I’m also excited to tour and meet folks at Facebook, Twitter, and Visual.ly; I’ll also give a couple of talks at Apple.

After a week in San Francisco, I’ll travel north to spend a few days in Seattle to give some talks at Tableau, Microsoft Research, and the SeaVis Meetup group.

I’m excited to either reconnect–or meet for the first time–a number of great data visualization folks. I’ll try to use this space to post some updates about my talks, conversations, and travels, and as many dataviz-selfies as possible (that should make Moritz happy!).

If you have any suggestions for good, local food, or (not obvious) tourist attractions, please let me know! And if you’re a SF or SEA resident and want to meet up, please drop me a line!

I had a really nice first day in SF with a little bit of work and a lotta bit of sightseeing. A couple of afternoon meetings got cancelled last minute, but my Lego friend and I had a great time tooling around the city. 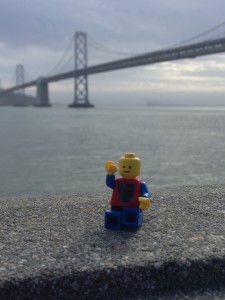 Today (Monday) was Day #1 at the SF Federal Reserve Bank. Three meetings, two phone calls, two tech checks, and a talk on how to improve presentations all went great. Plus, I made some terrific progress on a research project about the Disability Insurance program.

Two interesting things to note: First, someone asked a question I’ve heard many times before about whether making slides more visual might be perceived as being less technical or less sophisticated. I still don’t buy this claim–you can layer technical slides (e.g., equations) just like any other slide (e.g., list the equation and then layer each element–coefficient, variable definition, etc.–separately). It’s still all about thinking how your audience will digest and understand the information you’re presenting.

Second, someone told me they were pursuing their MBA and that their program instructs them to always include an Agenda slide and end with a “Questions?” slide. I just sighed at that one.

I also started a little Twitter kerfuffle by asking whether the two sets of circles in this WSJ graph make it difficult to discern the difference between the forecast series and the actual series. I felt like I had to do the mental math to determine when the forecast was above or below the actual (but maybe it’s just me). 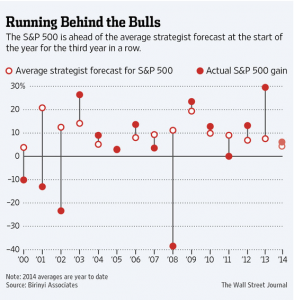 A couple of quick remakes and reactions though, made me think there are improvements to be made. 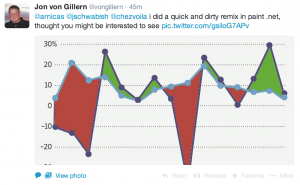 Ben Chartoff suggested his Washington Post graphic from a few months ago could work: 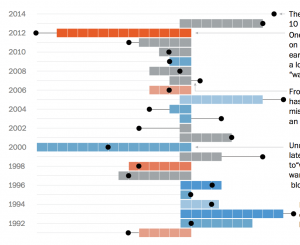 And a quick couple of options I whipped up in Excel: 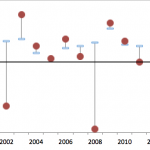 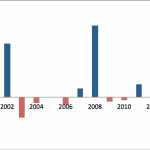 Made it through! Busy, but terrific day. Started with breakfast at Visual.ly with Drew Skau–I was really interested to hear about their greater shift towards the marketplace as opposed to a strict gallery of visualizations. I’ve been using the site less and less lately, primarily because it’s now harder to get to the visualization gallery; but I understand their new efforts and am interested to see how their future plans play out. 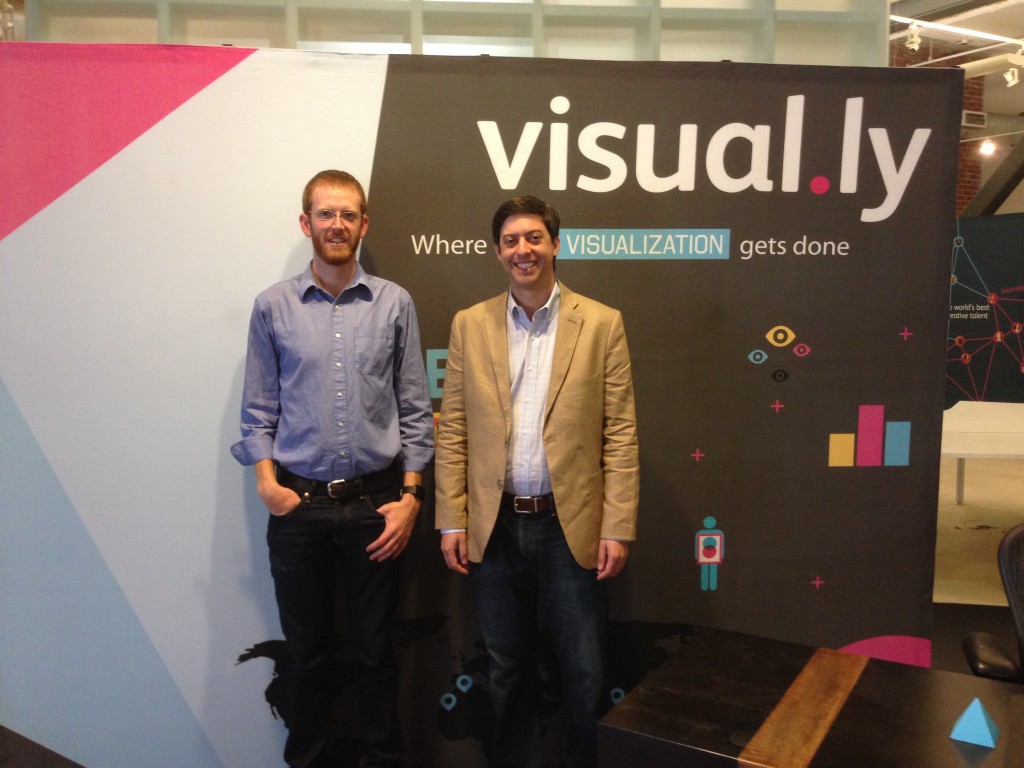 I gave two presentations at the Bank today. The first covered basic data visualization principles and was similar to the talk I gave at last year’s Tableau Customer Conference. The second was a new talk I’ve been developing on trends in and around data visualization. It was the first time through in front of a full audience (side note: thanks to my Urban colleagues for sitting through a practice run last week!) and was pleased with the results, though there is some tweaking still to do. If you’re curious, I’ll be giving it again at the Seattle Visualization SeaVis Meetup next week.

I finished the day having drinks with Cole Nussbaumer and her three-week old (I forgot how small their feet are at that age!). Cole and I covered a lot of ground–recent trends in dataviz, teaching challenges, our SXSW proposal, and strategies for writing books and blogs. I had to admit that I’ve stolen a bit of her recent material for some workshops (this one in particular). 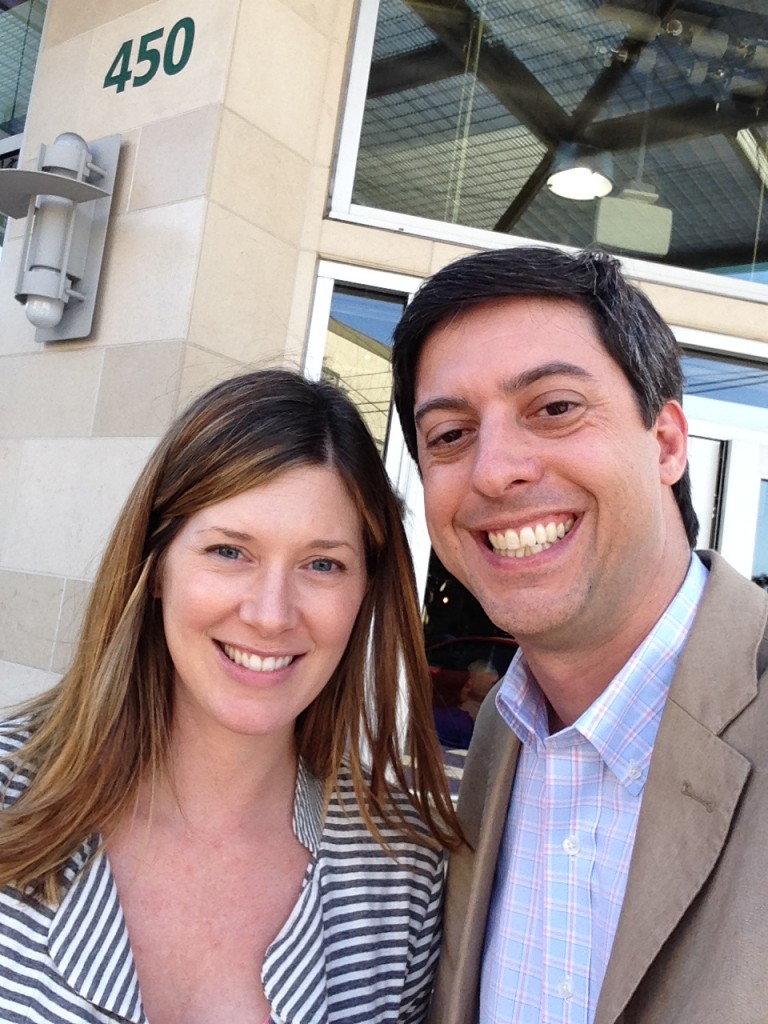 Okay, onto finish preparing a talk and workshop for tomorrow.

Over the past few days, I’ve visited Facebook, Apple, and Twitter (not to mention a bunch more time at the SF Federal Reserve Bank). All told, I’ve given six presentations and a data visualization workshop this week and am looking forward to resting a bit this weekend before heading north to Seattle.

Just a few observations and notes from my meetings and travels:

1. People are receptive to improving their visualizations, but need some guidance how to get started. For me, this means showing them how to reduce clutter, integrate the graphics and the text, and to think carefully about the needs of their audience and their product.

2. People want to know what tool or tools they should learn. This is a question I really can’t answer without knowing (at least) three things: what is the person’s existing skillset? (e.g., statistical programming languages? no programming background? designer? engineer?); what does their audience want from their visualization efforts? (e.g., are interactives important? do they want in-depth analysis or just the headline?); and what is their organization’s workflow? (e.g., are analysts responsible for the visualizations or are they going through an editorial/design group?).

3. Economists/analysts/whatever really want to see examples specific to their field. They want to see how you would change a typical conference presentation from lots of bullet points to one that has images and less text. Practically, what does that look like.

4. I’m still trying to figure out how I (we) can combine social media data and public policy research. It doesn’t seem like this is a big push just yet, and I’m still not exactly sure how to go about it, but it seems like an important area. (This is something I talk about in my presentations and hope to talk about a lot in Seattle).

5. I’m constantly tweaking my presentations; a presentation is never “done”, it’s never perfect. I was revising slides in the cab on the way to Facebook and Apple.

Overall, it’s been a great week in San Francisco. I’ve had a great time at the SF Fed, both teaching and talking about data visualization, but also making some real progress on a project on the Disability Insurance program. Also big thanks to Jason Sundram, Victor Powell, Jerome Cukier, Adila Faruk, Jim Cuseo, and Nico Belmonte for hosting me and feeding me quite well.

Next check-in will be from Seattle. 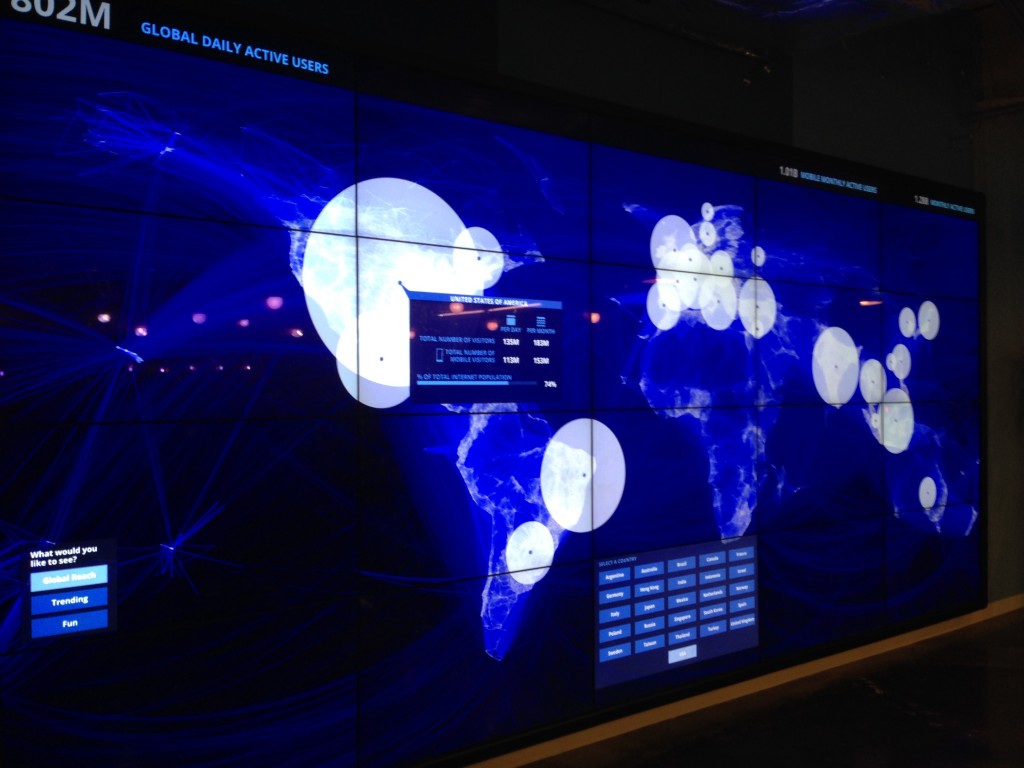 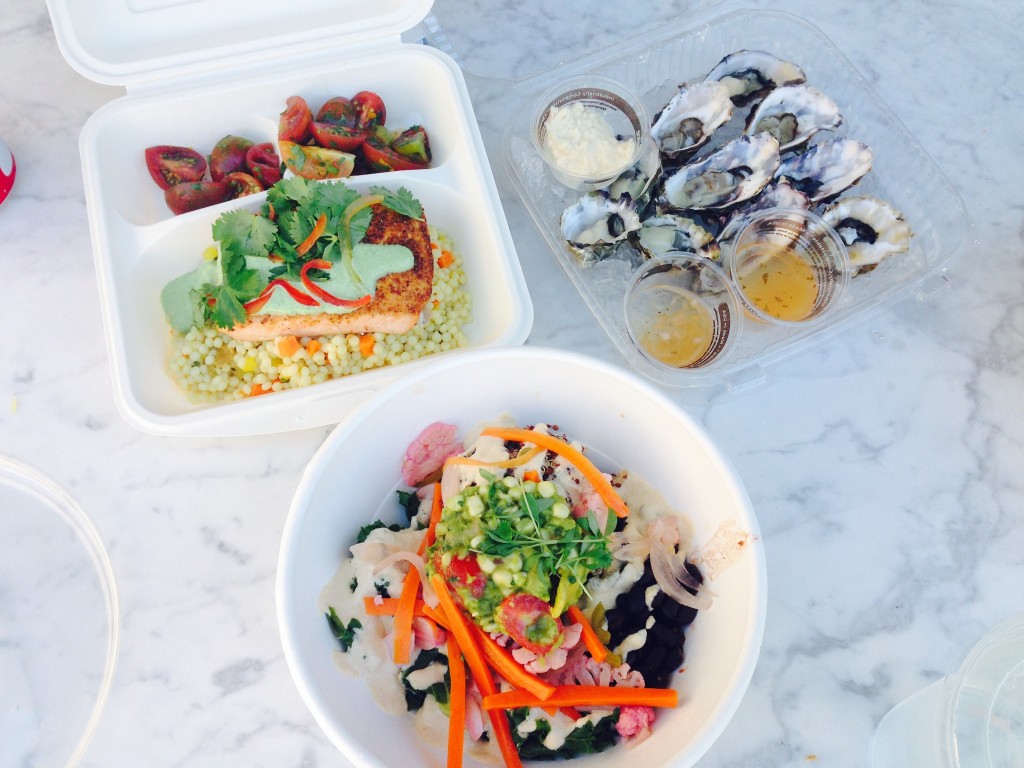 Yeah, oops, I sort of neglected this post over my final few days on the west coast. When I returned to DC, I had a day-and-a-half to dig out before heading off on a largely unplugged, week-long vacation in West Virginia. But, I thought it worth giving a quick rundown of my three days in sunny(!) Seattle.

Had a great day at Tableau, meeting with Robert Kosara, Ben Jones, and other members of the Tableau Public and education teams. Many of you know about the interesting developments going on at Tableau–new versions, Storypoints, Mac version, etc. After my talk, Robert and I spent a few hours digging through various government websites (part of the topic of my talk) and discussing why they fail and how they can be improved. I love getting Robert’s take on some of these things, especially as my first impression is as an economist and Robert’s is as an information visualization researcher. 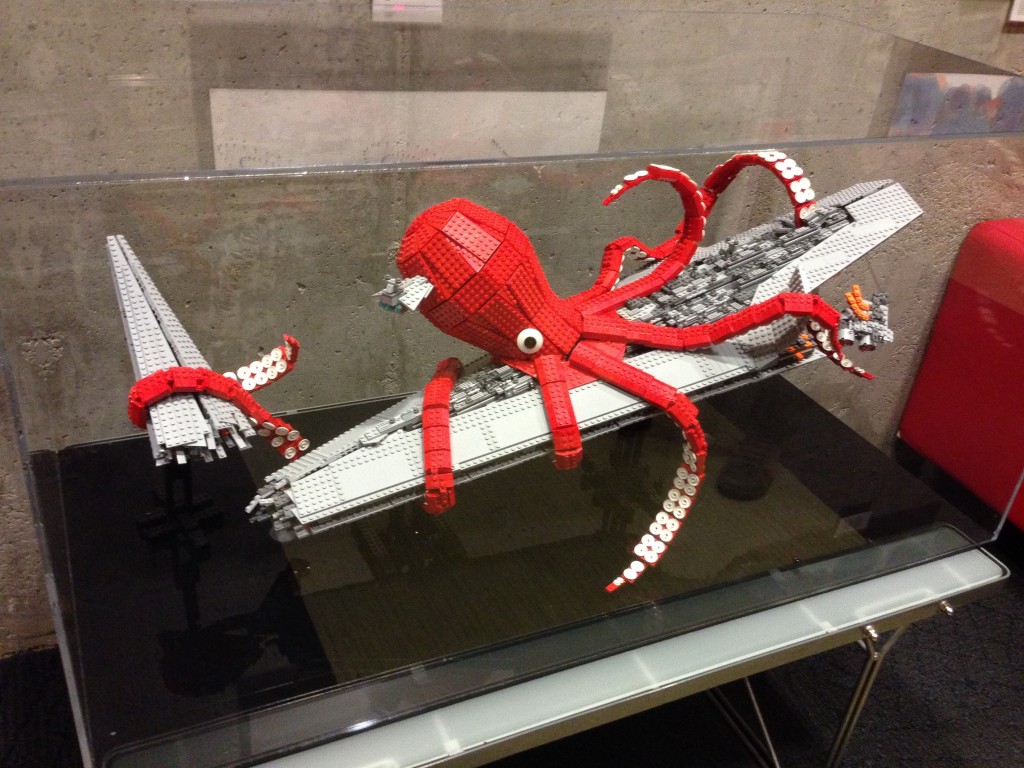 I started the day with a trip to the University of Washington to meet with Jeff Heer and Arvind Satyanarayan (of the Lyra fame)–fascinating discussion about tools in general, but also tools that folks in my field might be more likely to use. I’ve often wondered–and, again, this is something I talked about at Tableau and at the Meetup later in the evening–whether there can be a single tool that will be really good at statistics, design, and creating interactive visualizations. I don’t think we’re there yet (and I’m not sure we want to be!), and chatting with Jeff and Arvind helped me hone those ideas. Part of the challenge with the current landscape of data visualization tools is to create a workflow that enables people to easily move from one tool to another. For example, most economists I know work in Stata, which doesn’t have an interactive visualization package. But if it were easy to move a Stata output file into another interactive tool (e.g., Tableau, Lyra), it might encourage researchers to use those tools. Alternatively, maybe more researchers need to learn how to output their Stata datasets into other formats, such as CSV. Of course, this isn’t the entire problem: the important question is to get researchers to think visually. Many researchers use statistical tools and basic static visual representations of data to undertake their research, but I think gains can be made if researchers were to think in a more visual way by using some of these available interactive tools. 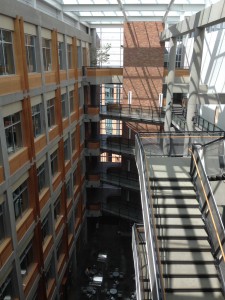 In the evening, I headed over to Amazon Web Services to give a talk at the SeaVis Meetup, which Noah Iliinsky kindly put together. I gave my (relatively) new talk, Can Data Visualization Save the World?–it’s always extra nerve-rattling to give a new talk (especially to a data visualization group), but there was probably about 45 minutes of Q&A after the talk. If the audience is engaged (and I should note that the vast majority of the audience hung out through the Q&A), you pique their interest people, and they ask lots of questions, then that seems a metric of success. Dinner with Robert Kosara, Jim Vallandingham, and Scott Murray followed with lots of discussion about new tools and teaching data visualization. 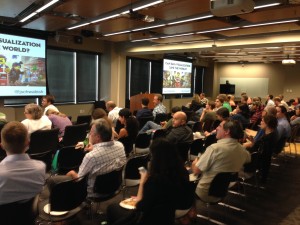 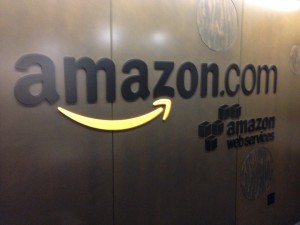 Last day of my trip was spent with the Microsoft Research Group in Redmond, WA. I spent the majority of my day with Bonghin Lee and Mike Pell, who showed me around the campus (as with all of the locations on my tech-tour, the cafeterias are always impressive). There are some really interesting projects going on at Microsoft (none of which I can describe here), and it was really interesting to see how they are thinking hard about the user and the users needs in the future. 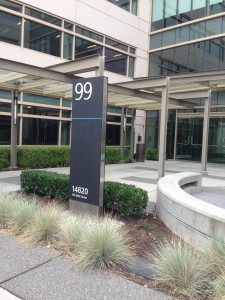 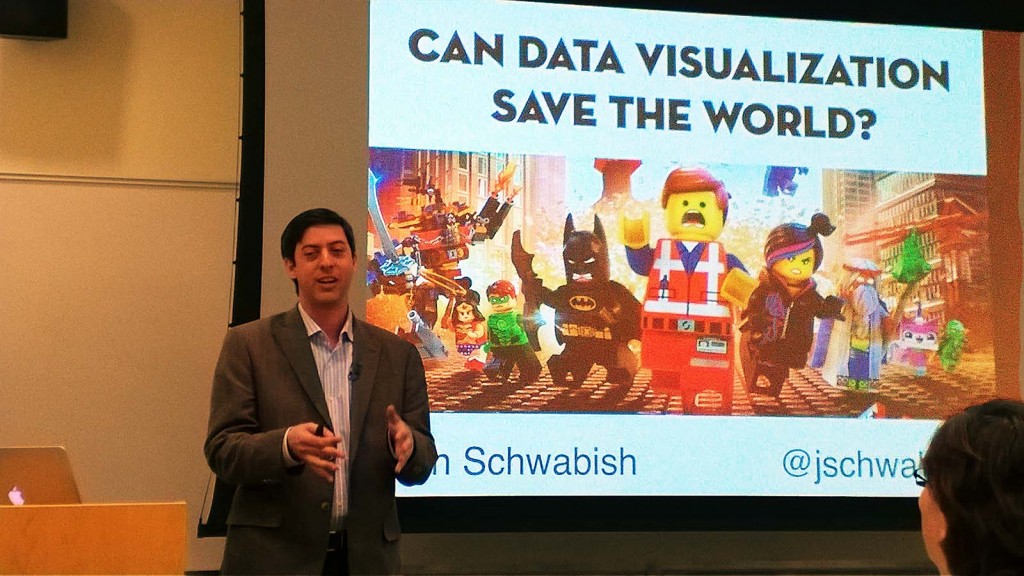 Apologies again for the lateness of this post, but I figure better late than never. It was a great west coast trip and I’m thankful to everyone I met and chatted with, the great questions and conversations, and seeing and learning about all the exciting data visualization developments. 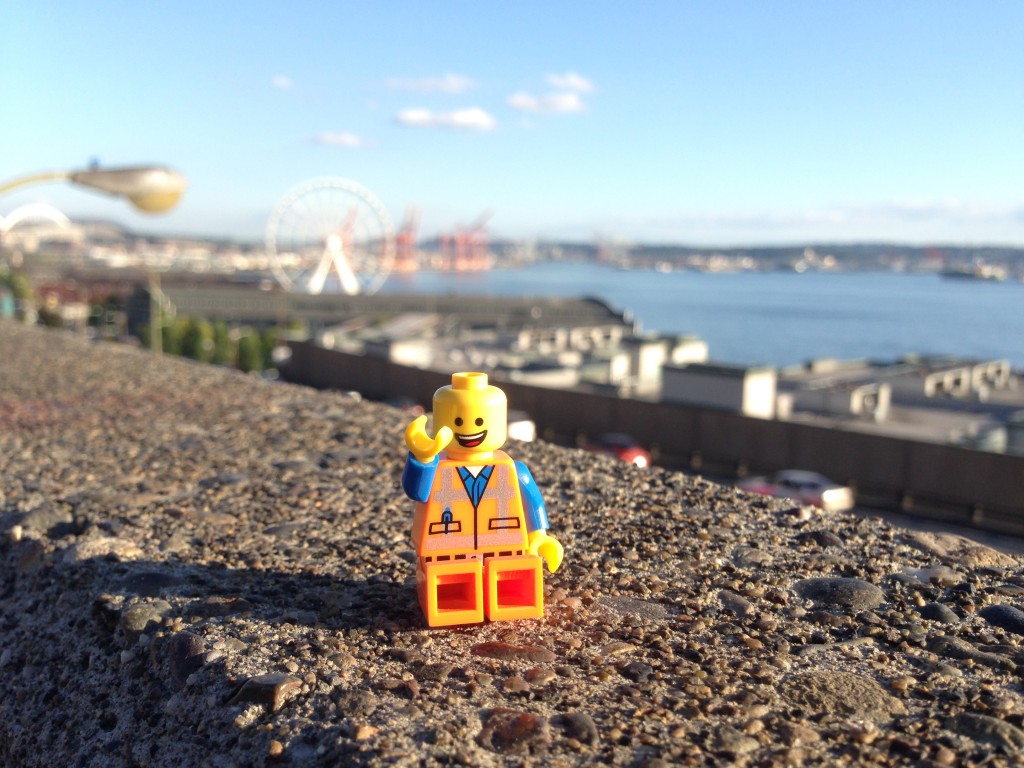