A simple remake for a simple chart 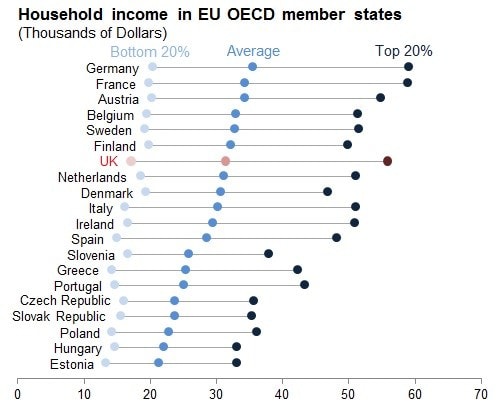 I had a hard time visually picking out the story in a simple chart published by the Financial Times earlier this week. There was nothing special or particularly complex about the chart—it’s a simple clustered column chart—but the fact that I couldn’t easily see the story made me think there must be a better way.

The FT article focused on how average household income in the United Kingdom is higher than in many other European countries, but that average household income in the bottom 20% of the income distribution is much lower in the UK than in the rest of Europe. The FT story mirrored the message in this report from the High Pay Centre, which used data from the Organisation for Economic Co-Operation and Development’s (OECD) Better Life Index.

The main graphic in both the FT story and in the High Pay Centre report was a simple clustered column chart:

Notice the slight changes FT made to the High Pay Centre’s chart: they aligned the country names at a 45 degree angle instead of at 90 degrees; used a blue color scheme instead of orange and grey; reduced the number of zeros on the y-axis by converting the data to thousands of dollars; and made some other minor changes to the legend, gridlines, and title. Aesthetically speaking, I prefer the FT approach because it does a better job of reducing clutter and highlighting the data. I did, however, like the way the High Pay Centre helped focus the reader’s attention on the United Kingdom by using a different color for the country label on the x-axis.

But both versions of the graphic fail to effectively visually communicate the information.

Here’s the passage from the FT article that discusses the figure:

The High Pay Centre found that, with average household incomes of $53,785, the richest 20 per cent in the UK were the third richest in their bracket of all EU countries measured by the OECD, lagging behind Germany and France.

However, a very different story applied to the bottom 20 per cent in the UK whose incomes were much lower than in other, more equal countries with a similar average income.

I found it difficult to navigate the text to FT’s graph (and the High Pay Centre’s version as well) for two main reasons. First, with 39 columns, it was a challenge to compare the different measures across the different countries. I couldn’t, for example, easily see how average incomes in the bottom 20% for the UK compared with the other countries. Second, the columns share one color palette, so values for the United Kingdom don’t stand out.

Instead of a clustered column chart, I tried a different approach. In this “dot plot,” I first rotated the graph—this rotates the country labels so that they are easier to read. I then plotted each data series as dots instead of columns and linked them with a thin line. In this way, I think it’s easier to track differences in each data series across countries and to make comparisons of the different values within countries. Finally, to better highlight values for the United Kingdom—the central facet of the FT story—I used shades of red for the dots and red for the text country label. One could imagine doing even more to highlight those values, such as brighter or different colors, or maybe some annotation. For those of you interested in the technical aspect of constructing this version, there’s nothing too fancy going on here. This was all built in Excel using three scatterplots and some data labels. (There was a little bit of trickery with the axis to get the country labels to fit on the chart; if you’re interested, drop a note in the comments below or contact me directly.)

I think this remake shows that even simple charts can be redesigned to more effectively communicate information. In this case, especially when a single country is of interest, highlighting those data (not just the label as in the High Pay Centre version) can be especially important.