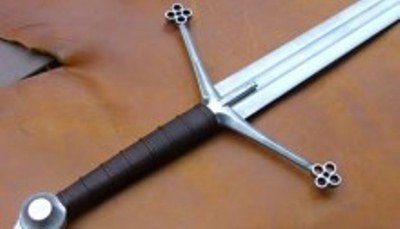 Alberto defines his “So What?” test as follows:

“A test that we can apply to any visualization, I believe, is the ‘So What?’ test…..I see some visualizations about that make me ask myself, ‘And?’”…. (around minute 37)

In this part of the discussion, Moritz argues that there are parts of newspapers, for example, that don’t meet the “So What?” test; stories that don’t touch you or aren’t meaningful or don’t impact you. Alberto responds:

Alberto has made this point before. In his terrific talk at Chicas Poderosas (if you haven’t watched it, it’s a great introduction to visualization) he discusses a student project (Visualizing Buffy) that tracked the screen time of each character in the show Buffy the Vampire Slayer (in some ways, the project is similar to Santiago Ortiz’s Lostalgic project). Here’s what Alberto said about that project:

“Think about the topic [of the Visualizing Buffy project]….It satisfies the needs of Buffy’s fans, but I believe the student could have done something different and much more worthwhile using the exactly the same technology [d3]. And again, I’m not saying that we should not be focusing on these kinds of things. These kinds of graphics are fun, they will bring attention to the work, etc., but perhaps they are not that important. Let’s reduce the amount of time we spend on these types of things; let’s increase the time we spend on things like that [healthcare.gov].” (around minute 52)

Let me begin with what I see as a contradiction in these statements: that the existence of a newspaper article suggests it has passed the “So What?” test, but that criterion does not extend to visualizations. Why? Do journalists have some sort of monopoly on saying what is important? Newspapers have entertainment sections, right? They probably covered Buffy in its heyday—was that coverage wasted ink?

Here’s a screen shot of the Most Read articles from the Washington Post on Thursday, May 21st. Do all of those articles meet Alberto’s “So What?” threshold? The meteor shower may not actually help address today’s social or political challenges, but it’s certainly interesting to many people. I, for one, don’t find a story about meteor showers as interesting as the story about inequality, but that doesn’t mean it doesn’t have value. 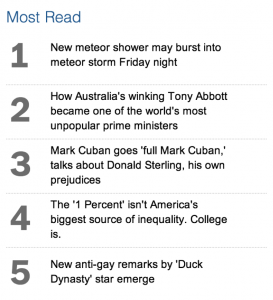 I’m being a little tongue-in-cheek here. I don’t think Alberto actually believes these products have no value. But I think we should be careful in writing off visualizations—or newspaper articles, academic journal articles, books, games, toys, sports, or really anything—that doesn’t meet some sort of arbitrary “So What?” threshold. Because the threshold you and I put on something may be completely different than someone else’s “So What?” threshold.

Take, as an example, Aaron Koblin’s Flight Patterns project (also discussed in the Data Stories podcast). The Flight Patterns project was popular for many reasons: it was relatable, it was beautiful, and it was stunning to see air traffic as it flowed from day to night and back again. But does it meet the “So What?” test? The graphic itself is not annotated—it doesn’t point out particular patterns, outliers, or stories. Those things could be added, of course, but were not. So in that form, perhaps Flight Patterns does not meet the (or should I say “a”) “So What?” test.

Now, let me put the Flight Patterns project in a different perspective. About a year ago, during a presentation about data visualization, I showed part of Flight Patterns to an audience largely made up of analysts from different government agencies. Two Federal Aviation Administration analysts pointed out that it could be used to examine U.S. airspace and flight patterns in ways the agency has not yet explored. In that perspective, Flight Patterns clearly passes the “So What?” threshold, right?

My point here is twofold. First, none of us are in a position to truly judge the “So What?” question because it will meet one threshold for some and a different threshold for others. I could really care less about characters in the Buffy series, but perhaps there are people, say, in the entertainment industry who could use the visualization to better understand character development in a successful television show. Similarly, I have little interest in marketing data, for example, but there are hundreds upon hundreds of infographics dealing with marketing. For some people—perhaps, even, people working in social policy or public policy fields—that information in those visualizations is valuable. Second, the serious and the fun can live together*. I can read The New Yorker and US Weekly (I don’t actually read either) and have a completely happy existence.

I’ll make just one final point that I’ve been struggling with for a while. There are a lot of visualizations out there that use big data or social media data. And some of them look great: mapping languages on Twitter certainly looks cool; mapping friends on Facebook is pretty. But I haven’t seen these projects or data applied to social or policy challenges (if you’ve seen one, please leave it in the comments below). On the one hand then, I think this is a real shame because I think (or maybe hope) there are ways to use these data to reveal something about public policy, economics, or governments. But on the other hand, perhaps these visualizations serve a different purpose: Maybe they simply illustrate our connections with one another, what it is to live in the 21st century—the human condition, if you will. So that itself may be a worthy goal.

I’ve spent most of my professional life conducting economic research on what I believe are important public policy challenges: among them, inequality, immigration, disability, and food stamps. But I hesitate to discount many journal articles or data visualization projects simply because they don’t deal with serious issues or don’t interest me. That is to say, I have my own “So What?” test; I just hesitate to give it to anyone else.

*Note: While I was writing this post, Chris Cillizza at The Washington Post wrote a nice semi-rant about why journalism isn’t broken. In it, he touches on some of the points I’ve made here.