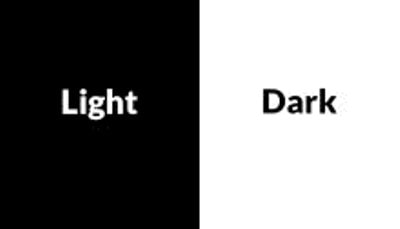 So I want to expand on Cole’s post to talk about light versus dark backgrounds in presentation slides. As Cole points out, Duarte (and others) typically argue that in large rooms or dark rooms, presenters should use slides with a dark background color. Some others, by contrast, argue that presenters should use dark backgrounds because the presenter won’t have a shadow when walking in front of the screen–with TVs more often used as projectors these days, I think this is less of a concern. I find it interesting that authors who advise using dark backgrounds in dark rooms fail to explain why, other than their basic ‘feeling’ that the text is easier to see. My thought (which I’ve only discussed briefly with my optometrist) is that our pupils dilate in dark light and because we want the important information–namely text and images–to enter our audience’s eyes, it’s better to use light text and dark backgrounds in darkly-lit rooms. In well-lit or small rooms however, most people suggest using white or bright(er) backgrounds. I’m not a big fan of pure white backgrounds–they tend to strike me as a bit too bright–and instead tend to use a light grey background or a subtle textured background.

Although these tips are useful guidelines, I don’t think it’s as simple as one or the other. What about mixing background colors within a single presentation? In a slidedeck I just helped create, we inverted the color scheme on the breaker slides (i.e., section introductory slides) so that instead of blue text on a white background the breaker slides used white text on a blue background. I felt this was an effective way to visually break the slides into sections to help the audience more easily follow the presentation. I’ve also tried using different background colors to set sections apart from one another.

But what about printing? Many of you probably just snickered, but it remains a fact that many people still print things out. How do colors–especially dark colors–work in the printed world? Well, aside from using a lot of ink, they don’t print out too well (especially in black and white). The solution calls for either not using dark backgrounds or for creating a secondary set of slides with a light background color. Sometimes–but not always–PowerPoint will do a decent job recognizing that the colors need to be inverted before printing. (You may want to try some VBA code to do the changes automatically. I’ve adapted this example code, but it requires some pretty specific modifications.) In the end, if printing is a major concern, then I would recommend sticking to a light background, even if you will be presenting in a dark or large room.

Finally, circling back to Cole’s original post, I find it interesting that many widely-shared data visualizations have dark backgrounds. Perhaps this is because–as Cole mentions–that the dark background, combined with bold, heavily-saturated colors, tends to stand out more. That itself may be a worthy goal, but one should take seriously color contrast seriously as dark backgrounds make opacities and other colors often hard to view. This discussion can very quickly lead down the road to questions about balancing aesthetics and visualization techniques, which I discussed a bit in an earlier post about Giorgia Lupi’s talk at the Visualized conference in January.